Alliance of NS Hispeed and SNCB

Expand
V250, branded as Fyra, is a high-speed EMU designed to run on the high-speed rail line between Netherlands and Belgium.
V250 / Fyra is manufactured by Ansaldo Breda. Image courtesy of Smiley.toerist.
Fyra provides passengers a quick, comfortable and reliable means of transport. 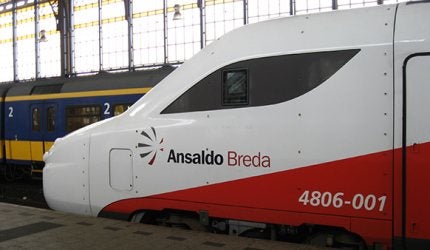 V250, branded as Fyra in the Netherlands and Belgium, is a high-speed electric multiple unit manufactured by AnsaldoBreda. It runs on High-Speed Line 4 in Belgium and HSL Zuid in the Netherlands, connecting Brussels and Amsterdam.

The first prototype of the train was unveiled in July 2009 and, after several trial tests and delays, the train is finally planned to be operational in September 2012.

Fyra, which runs at a maximum speed of 250kmph, provides an advanced, quick, innovative, comfortable and reliable transport option.

Fyra project in the Netherlands and Belgium

"Fyra, which runs at a maximum speed of 250kmph, provides an advanced, quick, innovative, comfortable and reliable transport option."

Deliveries of the train sets were expected to start in 2009. A lack of installation of level 2 European Train Control System (ETCS), however, delayed the development and delivery of the train.

Dutch Environmental and Transport Inspectorate (ILT) certified the vehicle and granted permission to Lloyd’s Register Rail, which is managing the certification process on behalf of NS Hispeed. This approval is valid only in the Netherlands and authorisation in Belgium is yet to be issued, but is expected to be granted by August 2012.

The Randstad is the name given to the densely populated western rim of the Netherlands, a conurbation that accommodates around two-thirds of the Dutch population. RandstadRail emerged from a long-envisaged scheme to connect the transport system of the country’s second city, Rotterdam, with that of Den Haag (The Hague), the seat of national government.

ECTS Level 2 systems were installed on high-speed lines in both countries and made compatible with the trains, which are expected to be operational in September 2012.

Fyra provides frequent international connections and comes with combined benefits of high-speed and metropolitan services. Fyra serves as the most comfortable and fastest link between main gateways for Amsterdam, Schiphol, Brussels, Breda and Rotterdam.

The cab body of the V250 is made of aluminium and driver’s cockpit of steel. The train comes with eight cars that can operate on varied voltages of 1.5kV DC, 3kV DC and 25kV DC. The design of the train is based on the European Railway Agency Technical Specification for Interoperability (TSI) and is compatible with most Trans-European lines.

The vehicle features a state-of-the-art water-cooled insulated gate bipolar transistor (IGBT) inverter traction system and asynchronous motors. It has a maximum power output of 5,500kW and maximum traction effort of 300kN, while it is fitted with advanced ETCS Level 2 Signalling systems.

"A total of 19 V250 train sets were ordered by the alliance, of which 16 are for NS Hispeed and three are for SNCB."

A total of 19 V250 train sets were ordered by the alliance, of which 16 are for NS Hispeed and three are for SNCB. These trains will be maintained by NS Hispeed’s subsidiary Nedtrain at its maintenance depot in Amsterdam.

Currently there are nine vehicles of which five are officially delivered to NS Hispeed and the remaining in the manufacturer’s plant in Pistoia, Italy.