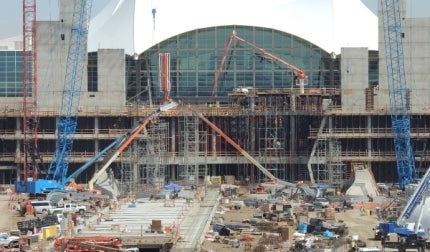 East Rail Line will be a new 22.8 mile commuter transit line running between Denver Union Station and the Denver International Airport. The project was approved under a 2004 voter-approved plan for expanding the transit system across the city’s metro region.

"The project was approved under a 2004 voter-approved plan for expanding the transit system across Denver."

The environmental impact statement for the East Rail Line was approved in November 2009. Construction of the new line began in 2010 and it is scheduled to open in 2016.

The Eagle P3 project is being developed in two stages. The first stage of development includes the construction of East Rail Line, the CRMF, the purchase of electric multiple-unit trains and the installation of electrical systems at the Denver Union Station. The Gold Line and the Westminster segment are being developed under the second stage.

The 38th & Blake station will be the first station on the line and will be located south-east of the UPRR corridor. It will feature 200 parking spaces and it will take four minutes from Denver Union Station.

The 40th & Colorado station is located at East 42nd Avenue and Jackson Street in Denver and will take nine minutes from Union Station.

The Central Park station, to be located to the west of the planned Central Park Boulevard and north of Smith Road, will be the third station on the East rail line and will take 13 minutes from Union Station and 22 minutes from Denver Airport.

Located in the north-west quadrant of Peoria Street, the Peoria station will be a transfer station with the I-225 light rail line.

Electric commuter rail vehicles with a maximum speed of 79mph will run through the East Rail Line. The commuter trains will hold 232 passengers (90 seating and 142 standing) and feature an advanced dynamic braking system combined with safety features such as positive train control and a vehicle monitoring system.

The trains will be equipped with an advanced video surveillance system, real-time passenger information system and a step-free boarding entry system for passenger safety and guidance.

The new commuter trains will run on a 25kV AC overhead electrical system.

As of May 2014, the major completed construction works include the installation of new traffic signals and pedestrian crossings at Smith Road and Monaco Street Parkway, as well as the foundation for the 38th/Blake Station pedestrian bridge.

Ongoing works include the final utility relocations on 40th Avenue between Blake and York streets, as well as the reconstruction of the Ulster Street commuter and freight rail crossing between Smith Road and 39th Avenue.

The construction of the 4,985ft Interstate 70 Flyover Bridge is also in progress.