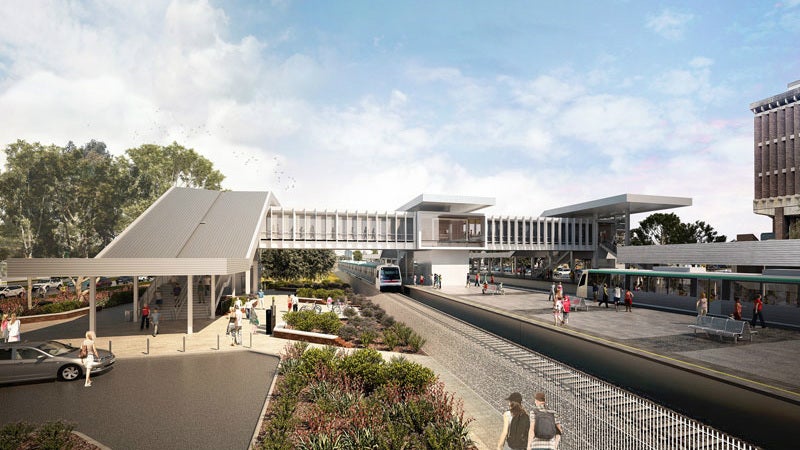 The East Perth railway station is located next to the Public Transport Centre on the Midland Line in Perth, Western Australia. Operated by Transperth, the station is currently being upgraded as part of the Perth Stadium Transport Infrastructure project and the Public Transport Authority’s (PTA) programme of Disability Discrimination Act (DDA) improvements.

The $25m station upgrade project is managed by the PTA and funded by the Western Australian Government under the public transport infrastructure investment as part of a $358m integrated transport solution for the new Perth Stadium.

The station will be used by approximately 7,500 of the 60,000 people expected to use the route to and from the new stadium when it opens for the 2018 Australian Football League (AFL) season.

The project will involve lengthening the station’s platform, adding new sheltered areas and replacing the existing pedestrian bridge with a new fully covered, DDA-compliant bridge. It will also include the installation of four new lifts and stairs, as well as new bike facilities and a rail crossover.

After the upgrade, the station is expected to be more accessible and capable of hosting larger crowds when the Perth Stadium opens in 2018.

The East Perth station upgrade is being constructed in three stages. The first stage started in mid-August 2016 and was completed in November 2016. Pedestrian access between the Indian Pacific platform and East Perth station footbridge was changed in November to enable the diversion of in-ground services and make way for the new concourse foundations.

The second stage of construction began in November 2016 and will be completed by June 2017. It includes the installation of a 41.5m temporary platform and the demolition of 45m of the existing platform. Rail infrastructure components, including cameras, signals and electronics, have been adjusted for the new train stopping positions. As part of the works, 50m of the existing Indian Pacific canopy at the Public Transport Centre was also removed.

New concourse foundations and a steel bridge module will be installed, as well as two new entry nodes. The demolished station platform will be rebuilt with a longer length of 55m and new lifts will be added.

Stage Three works will start in June 2017 and focus on the demolition of the existing pedestrian bridge and the remainder of the original platform. The new platform will be extended 100m to the south, and a new 40m platform canopy will be added. Overall, the project is scheduled for completion by late 2017.

The station is remaining open during the construction. In addition to works between 7am and 7pm, out-of-hours construction is being carried out during track closures at night or at the weekend to minimise disruption for passengers.

The electrical car-charging station is now unavailable until the completion of the upgrade. The southern end of the East Parade car park will be used as set-down location for construction material.

The Alliance Contract to design, procure and construct the East Perth Station Upgrade was awarded to the PRISM Alliance consisting of Laing O’Rourke, AECOM and the PTA in August 2016.

The PRISM Alliance is delivering the East Perth Station Upgrade project, using digital engineering (DE) technology and processes during the design phase before working on the construction activities.

By providing a greater understanding of complex construction processes and associated risks, the adoption of DE results in planning and construction benefits, such as enhanced integration of work elements, minimising rework, and increasing confidence in project costs and quality.

The PRISM Alliance is committed to continually improving design for manufacture and assembly (DFMA) outcomes. Via smarter, safer and more efficient solutions, the organisation is adopting a proactive end-to-end design and construction process.

Prefabricated concourse bridge modules will be delivered onsite in Q1 2017 fully roofed and cladded before being lifted into position. Maximising opportunities for off-site manufacturing allows the Alliance to reduce onsite activities resulting in improving health and safety as well as reducing traffic, noise and disruptions to general public and neighbouring areas.