Expand
Desiro ML, an improved version of Desiro Classic and Desiro UK, was introduced in 2008.
Siemens has received an order from Austria to supply 100 units of Desiro ML from 2015 onwards.
Desiro ML features modular interior design to meet different passenger capacities.
Belgium announced an order for 305 Desiro ML trains in 2010. 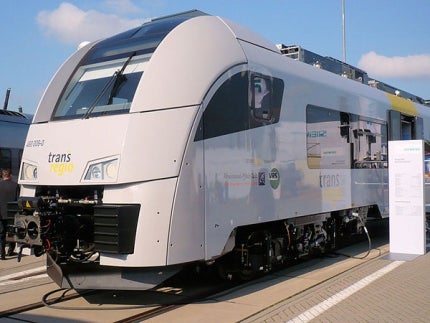 Desiro Main Line (ML) is an addition to Siemens’ Desiro platform of commuter trains. The Desiro class represents a variety of electric or diesel trains with multiple units designed especially for shorter routes.

Desiro ML is designed for commuter, regional and inter-regional rail links. It is designed on a ‘single car’ concept that offers lower maintenance costs.

Some of the the major features of the Desiro class rolling stock include flexible configuration to meet different passenger capacities, greater passenger comfort, greater energy efficiency and cost effectiveness.

Desiro ML made its debut at the international Trade Fair Innotrans 2008, held in Berlin. The rolling stock is in use in Germany, Austria and Belgium.

In 2002, another class of trains from the Desiro family was introduced especially for UK operators. More than 380 units of Desiro UK are currently in operation in UK and Thailand.

Desiro ML was created in 2008, based on the proven platforms of Desiro Classic and Desiro UK, with certain added features.

Two other variants of Desiro class have been introduced subsequently, which include the Desiro City (high-capacity light weight commuter EMU for the UK market) and the Desiro RUS (broad gauge electric commuter train for Russian Railways).

Desiro ML has been designed as a single-car train with low-axle loads. The basic design of Desiro ML allows for variable train lengths with easy addition or removal of the cars in the centre. Train length of different configurations of Desiro ML varies between 48.4m (two-car) and 93.3m (four-car).

Desiro ML offers lower floor height, which is either 600mm or 800mm. The number of doors for each car can be configured as per need.

The body of Desiro ML is manufactured from lightweight aluminium that complies with crash resistance specifications. The bogies are derived from Siemens’ SF 6000 family and are equipped with secondary air suspension.

Each motor car of the Desiro ML rolling stock features four semi-suspended 325kW asynchronous motors that give a starting acceleration of up to 1.1m/s2.

Desiro ML is equipped with regenerative braking system along with disc brakes and magnetic track brakes.

Signalling and control systems equipped in the Desiro ML

The rolling stock has been designed to adapt to different signalling and ATP systems. It is equipped with Sibas 32 train control system.

The operator has the flexibility to configure Desiro ML as per the transport capacity needs and traction systems. The train can be optimally used for commuter, regional and inter-regional services.

It can be operated at a maximum speed of 160km per hour with a passenger capacity of up to 384. Being based on single-car concept, Desiro ML involves fewer components that results in lower maintenance cost. The short wheelbase of the bogie also reduces wear and tear. The low boarding height of Desiro ML is convenient for riders with impaired mobility.

Energy efficiency is one of the major features of Desiro ML. The DMU version of Desiro ML, for instance, consumes 35% less fuel compared to a conventional diesel engine train, due to the innovative energy storage system.

"The Desiro class represents a variety of electric or diesel trains with multiple units designed especially for shorter routes."

In April 2010, Siemens signed an agreement with Österreichische Bundesbahnen (ÖBB) of Austria to supply up to 200 Desiro ML EMUs. In January 2013, Siemens was awarded a contract worth €550m ($743m) to supply 100 Desiro ML three-unit trains as part of this agreement.

The trains will be delivered to Austria starting from late 2015.