Railway station and over site development

Expand
Farringdon station is expected to become one of the busiest stations in the UK.
The planning approval for the six-storey above station development located on the western ticket hall was received in 2013.
Crossrail Farringdon station is estimated to be used by 90,000 passengers a day.
Tunnelling works were in progress under the Cowcross Street as of August 2014.
Four tunnel boring machines named Phyllis, Ada, Victoria and Elizabeth are being used for the Farringdon station construction.
The urban realm will be developed in coordination with the station entrances, the planned over site developments and the station’s immediate surroundings. 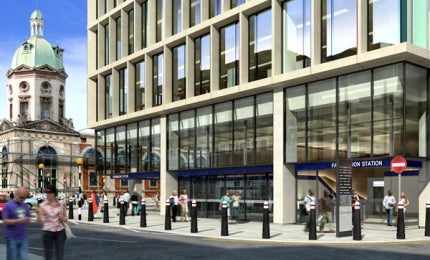 One of the seven new stations being built on the central section of Crossrail route in London, Farringdon station will be a major interchange station connecting Thameslink, Crossrail and London Underground services. More than 140 trains (including 24 Crossrail trains) per hour are expected to run through the new interchange station when it becomes operational in 2018.

Farringdon station will be a key link in bringing passengers from outer London to the business hubs in the city as well as in Canary Wharf. It will enable Crossrail passengers from Farringdon to reach Tottenham Court Road in three minutes, Paddington in seven minutes and Heathrow in 31 minutes. The station will also provide direct connection to Gatwick and Luton Airports.

As the only station providing access to all three railway networks in the city, Farringdon is expected to become one of the busiest stations in the UK.

Farringdon is located on the Crossrail central line between the Liverpool Street and the Tottenham Court Room stations. To the west of the station site lies the Smithfield Conservation Area, while to its east and north lies the Charterhouse Square Conservation Area.

"As the only station providing access to all three railway networks in the city, Farringdon is expected to become one of the busiest stations in the UK."

The Crossrail Farringdon station comprises two 245m-long platform tunnels linked to two ticket halls at the east and west. The western ticket hall will be shared with Thameslink services and the eastern ticket hall, being linked directly with the London Underground platforms at Barbican station, will provide access to Metropolitan, Circle and Hammersmith and City lines.

The Crossrail Farringdon station is estimated to be used by 90,000 passengers a day whereas the interchange services will be availed by 150,000 passengers.

As of August 2014, tunnelling works for the Crossrail station were in progress under the Cowcross Street. From Cowcross, the tunnelling will progress to the south end of St John Street and from there it will continue towards Charterhouse Street. It will end at the eastern ticket hall. Four tunnel boring machines named Phyllis, Ada, Victoria and Elizabeth are being used in the Farringdon tunnelling works.

The planning approval for a six-storey development located above the western ticket hall was received from the London Borough of Islington in 2013. The 207,000ft² development will include office space and retail units at the ground level. Designed by architects John Robertson, the building will provide entrance to the offices from the corner of Cowcross Street and Farringdon Road. The development will also improve local views of St Paul’s Cathedral.

The second above station development, which comprises one floor of retail and reception areas and five floors of column-free office space, is expected to be built above the eastern ticket hall opposite Smithfield Market. Designed by PLP Architecture, the development plan has achieved an ‘Excellent’ rating in the Building Research Establishment Environmental Assessment Methodology (BREEAM) pre-assessment exercise.

A joint venture of BAM Nuttall, Ferrovial and Kier (BFK) was awarded a £200m ($327m) contract for the main construction works of the Crossrail Farringdon station project in November 2011.

BFK is responsible for the excavation, construction, mechanical, electrical and building fit-out of the western and eastern ticket halls as well as similar works on the twin platform tunnels and associated cross passages.

VGC Labour Solutions was awarded a £6m ($9.8n) contract by BFK for supplying all categories of labour for the station construction project.