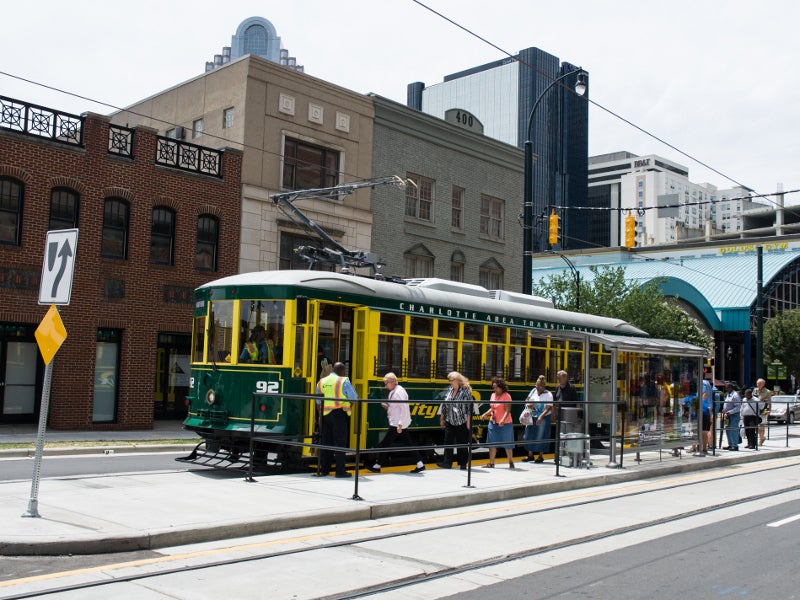 The CityLYNX Gold Line, formerly known as Center City Corridor, is a 10mi (16km) streetcar project in the city of Charlotte, North Carolina, US. The project, which is a key part of the Charlotte’s 2030 Transit Plan, is being developed in phases.

Phase one, which included the construction of the initial 1.5mi (2.4km) stretch, was opened in summer 2015.

Construction of Phase two, which will further extend the line by 2.5mi (4km), will begin in fall 2016 and is scheduled to commence operations in early-2020, while the third phase is scheduled for completion by 2023.

Once completed, the 10mi line will eventually connect the University Park area in the west Charlotte and the Eastland Community Transit Centre in the east through Uptown Charlotte.

Charlotte Area Transportation System (CATS) is responsible for the operation and maintenance of the streetcar line.

Construction of the first phase of CityLYNX gold line was initiated in December 2012. The phase entailed the construction of a 1.5mi double-track, in-street rail line beginning at the Charlotte Transportation Centre (CTC) on Trade Street and ending at Novant Hospital at Hawthorne Lane. It utilises the existing half-mile track along the Elizabeth Avenue.

The line connects the Time-Warner Cable Arena and the University of North Carolina at Charlotte uptown campus to the Central Piedmont Community College (CPCC) campus, Presbyterian Hospital, Presbyterian School of Nursing and the commercial complexes along Elizabeth Avenue.

The CTC, which houses the CATS primary transfer location between bus system and the existing LYNX light rail service, is the main terminus for the project, while Hawthorne & 5th Street is another terminus.

"Charlotte Area Transportation System (CATS) is responsible for the operation and maintenance of the streetcar line."

The second phase will extend the line by another 2.5mi (4km) on the east and the west ends, bringing the total completed route to a length of 4mi (6.43km).

The line will be extended by two miles (3.21km) westwards from CTC to French Street and will see a 0.5mi (0.8km) extension at the east end along Hawthorne Lane from Presbyterian Hospital to Sunnyside Avenue.

Works under the phase will include the construction of 11 new stations, upgrades to six existing stops on the Phase one route, right-of-way acquisition, and the purchase of seven modern streetcar vehicles to replace the existing replica trolleys.

Street car services on the route will be available at 15-minute intervals during weekday peak hours, off-peak periods and on weekends.

Modern trams will replace the existing vehicles on the line. Based on European tram designs, the street cars will use new technology and will be built to operate in mixed traffic in urban streets.

The trams will be smaller and lighter, with a capacity to carry 117 passengers operating in both directions. They will feature three tram sections of bleachers and have doors on both sides.

Financing for the streetcar project in Charlotte

"Street car services on the route will be available at 15-minute intervals during weekday peak hours, off-peak periods and on weekends."

Development of first phase was estimated at $37m, $24.99m of which was provided by the Federal Transport Administration (FTA) through its Urban Circulator Grant, while the remaining $12m was raised from city funds.

The second phase is estimated to cost $150m, which will be funded by local and federal governments on 50:50 basis.

The local government’s 50% share will be raised through non-property tax capital funding, which includes unallocated and contingent capital accounts within its revenue sources. The other half will be granted by the Federal Government, which has included phase two in President Obama’s FY2016 budget.

The planning and engineering services for the entire project was provided by RS&H, a facilities and infrastructure consulting firm based in the US. RS&H has also provided infrastructure design and planning support, as well as final designs for phase two of the project.

Design and construction supervision for the entire project is being provided by the City of Charlotte’s Engineering & Property Management (E&PM) department.