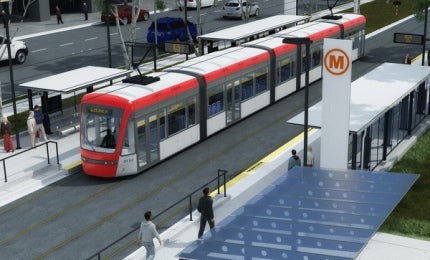 The Capital Metro Stage 1 Project in Canberra, Australia, is a light rail service planned to run from Hibberson Street, Gungahlin to Alinga Street in the city centre. The trains will be able to carry at least 200 passengers and will run every five minutes during peak hours, along the 12km route.

Construction of Stage 1 is expected to be completed in three to four years, with construction beginning in 2016.

Formed in July 2013, the Capital Metro Agency is responsible for the design, procurement and delivery of Stage 1 of the light rail project and is currently completing a number of design stages and a full Business Case. The business case will be presented to the ACT Government later this year for an investment decision. Subject to that decision, an expression of interest is planned to be released by late 2014.

The Capital Metro project will integrate with the existing ACTION bus network and is a part of the Transport for Canberra policy devised in 2012.

Capital Metro Stage 1 will run from the city centre to Gungahlin, the fastest growing area in Canberra. The route will run along Northbourne Avenue, the Federal Highway and Flemington Road. It will deliver high-quality, reliable and frequent public transport down one of Canberra’s busiest corridors. Light rail will provide a competitive alternative to driving and help manage congestion as the corridor population continues to grow.

"Construction of Stage 1 is expected to be completed in three to four years, with construction beginning in 2016."

The light rail project is expected to provide approximately 3,500 jobs during construction.

Light rail in Canberra will encourage smarter land use, allowing the city to become more compact and efficient. It will act as a catalyst for urban transformation and revitalise the declining Northbourne Avenue, the entrance to the nation’s capital.

Capital Metro will support a shift towards public transport. The main focus is to encourage citizens to leave their cars at home and use the metro. A new and easy-to-use service will generate travel, particularly into the central retail and commercial precinct of Civic. The integrated bus and light rail services will deliver a better all-round service for customers.

A potential light rail network across Canberra is being prepared as part of a Light Rail Master Plan, which is due for release in early 2015.

The major stations will be located at Gungahlin town centre, Dickson and the Alinga Street/Northbourne Avenue intersection in the city. There will be up to 14 stops, which will be 750m to 1.5km apart. The last stop will be at Alinga Street near the City Bus Interchange. All stops will have audio call/help points, CCTV surveillance cameras and dedicated hearing loops. They will also have passenger information displays to provide commuters with up-to-date service information on both the stop and interconnection with bus services.

Wi-Fi connectivity will be provided at stops along the route and onboard the vehicles.

The number, size and type of light rail vehicles used in this system will be confirmed through the procurement process. Early modelling shows an approximate fleet of 14 vehicles.

The depot will be located in the industrial suburb of Mitchell, adjacent to existing government sites. It will provide operational management and administrative offices, as well as being an operations and maintenance facility for the light rail vehicles.

Substations containing transformers, rectifiers and switchgear either in-house or in outdoor compounds will be located approximately 2km apart along the corridor. These substations will provide the traction power needed to run the light rail system. Power is currently proposed to be supplied to the vehicles by a single overhead wired system.

Funding for the Capital Metro

The Australian Capital Territory (ACT) government has allocated funding in the 2014-15 ACT Budget to advance the project to the ‘investment ready’ stage. The funding method for Stage 1 delivery will be confirmed by late 2014.

The light rail route will use a median alignment. There is currently a wide median along the majority of the route, which provides significant construction and operation benefits. The alignment will also allow for retention of the current traffic capacity along the route and creates minimal traffic disruption.

The Capital Metro Agency plans to create a pedestrian mall on Hibberson Street, Gungahlin, between Hinder Street and Gungahlin Place. Gungahlin Place and Dickson will become major interchange points for buses with the light rail network.

EY are providing commercial advice to the agency and Clayton Utz are providing legal counsel. The Capital Metro Agency has undertaken market sounding and plans to proceed towards an industry briefing and expression of interest, subject to a government investment decision.