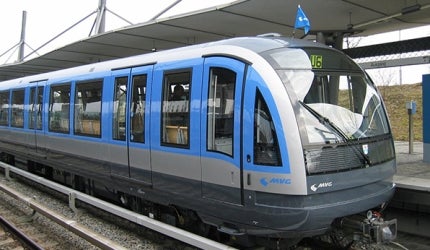 The C2 metro trains will be operated on München U-Bahn, the underground rapid transit network of Munich. Munich Public Transportation Company (MVG), a subsidiary of Munich City Utilities (SWM), owns and operates the underground subway network that that serves more than one million passengers a day with a total track length of 100km.

Details of the C2 rolling stock on the München U-Bahn

"The plan to replace around 60% of old trains with new ones is in place due to increasing maintenance costs and unavailability of spare parts."

More than 550 trains, Class A, Class B and Class C, are in use in the rapid transit network. The plan to replace around 60% of old trains with new ones is in place due to increasing maintenance costs and unavailability of spare parts.

Of the 21 ordered C2 trains, 14 will replace the Class A trains, which have been in service for more than 40 years. The final seven will be introduced in the downtown line sections as part of MVG’s 2010-2020 service campaign to reduce the headways between trains from two and a half to two minutes.

The C2 trains represent the latest version of Class C trains operating in the Munich metro network. Class C trains, which are available in two variants, C1.9 and C1.10, were deployed in the network between 2002 and 2006. A total number of 18 six-car C1 trains were used to replace the erstwhile two-car Class A trains.

The permanently coupled six-car C2 trains, made with an aluminium structure, will be 115m long and 2.90m wide. The C2 is designed to operate in 750V DC voltage systems and on 1,435mm track gauge. Each passenger car of the train will have six wide doors. The height of floor above top of rail (TOR) will be 11m, while the maximum axel load of the train will be 13.5t.

The first version of C2 class of trains, C2.11, is similar to C1.9 and C1.10 units with added features borrowed from modern metro trains such as Siemens Inspiro.

The C2 type trains were designed by Alexander Neumeister of N+P Industrial Design in co-operation with SWM/MVG.

The C2 trains are being built by Siemens at its plants in Vienna, Austria, and Munich-Allach, Germany. The first car body of the new train was unveiled in October 2012. The first four C2 trains are scheduled to enter commercial service by the end of 2012.

The new underground metro trains will offer a passenger capacity of 940, compared to 912 on C1 trains.

The C2 trains will have padded seats for 220 passengers and standing capacity for 720 passengers. The train has an extended surface area to accommodate wheel chairs and baby carriages. Its cars are permanently coupled offering riders accessibility from end-to-end.

"The new underground metro trains will offer a passenger capacity of 940.

The new underground trains can be operated at a maximum speed of 90km/h. The maximum starting acceleration of the C2 train will be 1.3m/s2 and the mean braking deceleration 1.2m/s2.

The door edges of the train will feature colour LED light strips, which make the opening and closing sequences prominent. The interior lighting of the train will consist of LED lamps rather than halogen spotlights, which will ensure better quality of lighting with less energy consumption. The front section of the train will also feature LED-based lighting equipment.

The train is equipped with energy saving features, such as regenerative power braking facility. The train will also have lower maintenance costs and will be 95% recyclable.

Most notably, the C2 underground metro trains offer the option for driverless operation. The driver cab can be removed to add further passenger capacity.