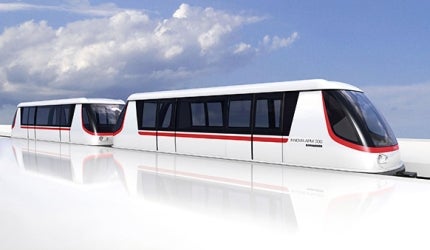 INNOVIA APM 300 is a new-generation automatic people mover designed and manufactured by Bombardier. It is specially designed for flexible operation in both urban and airport transportation.

The driverless train is being used in some of the biggest airports and busiest cities across the world. It offers great route flexibility, high passenger capacity, exceptional efficiency, low energy operation, low cost and longer life, and requires very low space for its infrastructure.

INNOVIA APM 300 has two predecessors namely INNOVIA APM 100 and 200. The new variant is designed to be compatible for operation with the system bases of the two predecessors. This makes the vehicle adoptable to customers upgrading to APM 300 model without major variations in infrastructure.

Design of the Innovia APM 300

"The driverless train is being used in some of the biggest airports and busiest cities across the world."

INNOVIA APM 300 vehicles are designed with spacious modern interiors so as to accommodate large passenger volumes. It features state of art subsystems with modern aesthetics, which yields optimised functionality.

The sleek and aerodynamic design gives significant flexibility to the train. The bogies are designed with light weight, lasting, impact and corrosion-resistant aluminium. The train is equipped with rubber tyres, directable axles and centre guidance systems.

Advanced inverter controls and AC traction motors are used in the design of the vehicle. The interface between each car and the guide-way is flexible to be installed in elevated, ground, tunnel and underground environments.

The advanced suspension and guidance system decreases noise vibrations and provides an excellent ride performance. It has an exceptional capability of handling up to 10% slopes and 22m tight curves.

The INNOVIA APM 300 vehicles have large windows letting in maximum light thereby providing passengers with excellent visibility. The seating can be customised depending on urban and airport applications. The cars are equipped with grip stanchions and roof suspended hand holds for support of passengers standing.

The vehicle has luggage spaces, closed circuit television and information display screens. It also has dedicated space for passengers with restricted movement.

TWINDEXX is a double-deck train that is specially designed by Bombardier Transportation for Swiss Federal Railways (SBB). The rolling stock was designed in response to SBB’s proposals to launch an intercity high-speed express train. The trains proved to be the feasible choice for long-distance intercity transport on SBB’s existing routes with short platforms.

Automation system of the APM 300

Bombardier’s CITYFLO 650 driverless system is installed in the INNOVIA APM 300 for unattended driverless train operation. It consists of a bi-directional communication system, which helps in automatic transition of the vehicle in segregated tracks.

INNOVIA APM 300 is structured in such a way that it produces minimal environmental issues. It incorporates many environmental features, such as regenerative breaking system, intelligent power management system and LED lighting systems.

Orders and deliveries of the Innovia APM 300

In May 2011, a $96m contract was awarded to Bombardier Transportation for the installation of INNOVIA APM 300 systems and CITYFLO 650 technology on 1.5km double track line at the King Abdulaziz International Airport. The contract was awarded by Saudi Binladin Group, the contractor for the undergoing development project at the airport. Bombardier will operate the line for four years with an option to extend for two more years.

In November 2012, a $106.72m contract was awarded to Bombardier Transportation to design and build 1.5km of link between terminal 1 and concourse 4 at Dubai International Airport, and supply 18 INNOVIA APM 300 trains equipped with BOMBARDIER CITYFLO 650 CBTC technology.