Expand
Bombardier TWINDEXX high-speed double deck trains are operational in Switzerland, Denmark, Poland, Germany, Luxembourg and Israel.
TWINDEXX Vario is one of the two variants of the TWINDEXX double deck train.
The TWINDEXX can run faster even on curves thanks to the specially designed propulsion system. 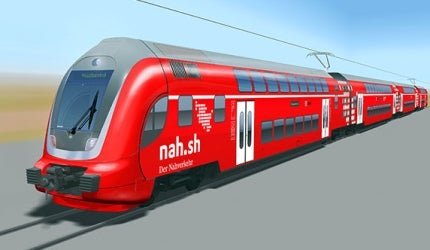 TWINDEXX is a double-deck train that is specially designed by Bombardier Transportation for Swiss Federal Railways (SBB). The rolling stock was designed in response to SBB’s proposals to launch an intercity high-speed express train. The trains proved to be the feasible choice for long-distance intercity transport on SBB’s existing routes with short platforms.

The train set provides excellent flexibility with its high capacity and easy-to-customise features. An added advantage is its compatibility to be operated with the double-deck engines of previous generations. Another special feature is its dual functionality to be operated as an EMU and as a locomotive.

"TWINDEXX is successfully operated in countries such as Switzerland, Denmark, Poland, Germany, Luxembourg and Israel."

TWINDEXX is successfully operated in countries such as Switzerland, Denmark, Poland, Germany, Luxembourg and Israel. Its operational speed is 160kmph to 189kmph, with a maximum speed is 230kmph.

In October 2011, Bombardier won the prominent "Tell Award" of Switzerland for its efforts in developing TWINDEXX trains and MITRAC propulsion and control system.

Design specifications of the TWINDEXX trains

The TWINDEXX trains consume 50% less energy than other comparable vehicles. This was achieved by using ECO4 technology and FLEXX Tronic WAKO system bogie technology, both developed by Bombardier.

FLEXX Tronic WAKO system is a part of Bombardier’s FLEXX Tronic bogie platform. The technology eliminates passive steering and suspension elements, which were the main drawbacks in the previous generations.

The Energy Management Control System offers a tool by which the operator can control the energy consumption depending on the prevailing conditions. These technologies improve the train’s performance, save 10% of total energy consumption and limit the CO2 emissions.

The European Railway Traffic Management System (ERTMS) is a major industrial project being implemented to enhance cross-border interoperability through Europe by creating a single standard for railway signalling. ERTMS is a continuous communication-based signalling system.

SBB was the first TWINDEXX Express customer. The variant can run at 230kmph. It is available in four, eight and 16-car configurations. The maximum drive power for an eight car train set is 7.5MW and overhead line voltage is 15 kV/16.7Hz. Door width for the variant is fixed at 1,400mm. The cars of the variant can also be used as cargo compartments, business compartments and trolleys for at-seat service.

Deutsche Bahn was the first customer for TWINDEXX Vario. The variant can travel with speeds ranging from 160kmph to 189kmph. It can be used as an EMU and Diesel Unit. It works on a 15kV/16.7Hz overhead line voltage with maximum acceleration of 0.6ms-2 to 1.2ms-2.

Maximum drive power of the variant is 2.3MW per motor cab. The lengths of control car, driven control car and intermediate car are 27.3m, 25.3m and 26.8m respectively. The widths of the doors are fixed at 1,300mm and 1,890mm for low entrance and high entrance respectively.

Features of the TWINDEXX trains

The TWINDEXX Vario comes with both low and high floor entrances, which enhances the accessibility of the passengers. The upper level decks can be accessed by means of brightly lit staircases. The advanced sliding steps will be of great advantage to people with reduced mobility.

All the car sets are air-conditioned and come with many optional features such as electronic seat reservations and seat numbers, reading lights, external loud speakers and mobile repeaters. Large-sized windows let in natural light to reduce artificial lighting by energy saving LED lights.

The trains are designed to be pressure resistant, which eliminates ringing in ears due to pressure waves that are produced when the train is propagating in tunnels.

In December 2008 a framework agreement was signed between DB and Bombardier Transport. DB placed a number of orders with Bombardier as part of this agreement.

CM4
CM4 has proven experience with over 30 years in the...