Number of Cars per set

Expand
The AT-200 commuter train was launched by Hitachi Rail Europe in July 2014.
The AT-200 comes in 3-car to 12-car configurations.
The interiors of the AT-200 are designed to provide passenger comfort. 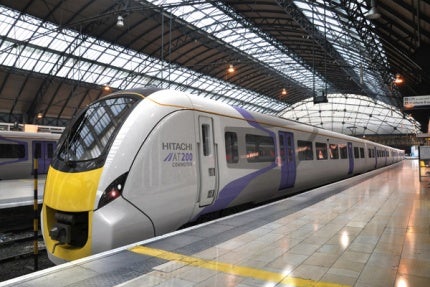 AT-200 is a modular electric commuter train launched by Hitachi Rail Europe in London in July 2014. The new train, part of Hitachi’s A-Train family, is designed for regional and outer suburban passenger service operations and comes with a range of safety and passenger comfort features.

The new rolling stock, targeted for the UK rail industry, has a design life of about 35 years. Its flexible modular design allows operators to customise it as required.

The AT-200 electric multiple unit (EMU) train units will be manufactured in Hitachi’s new factory in Newton Aycliffe, County Durham, although the train bodies will initially be sourced from Japan.

Hitachi Rail Europe expects to offer the AT200 when ScotRail calls tenders for new EMUs for operation between Edinburgh and Glasgow upon the completion of the Edinburgh Glasgow improvement programme (EGIP) involving the upgrade and electrification of the inter-regional rail route.

AT-200 structure and design

The body of the AT-200, offered in three- to 12-car configurations, is made of lightweight extruded aluminium alloy using friction stir welding (FSW), making it 20% lighter than the existing lot of high-speed electric trains while also increasing its corrosion resistance.

The car length of the AT-200 varies from 20m to 26m, and each car will have two sliding plug doors per side for the smooth handling of peak rush hour, while restricting the train’s dwell time to the 60 to 90 seconds range.

Inter-vehicle gangways in the train allow for optimum utilisation of passenger space, tables and toilet facilities.

The commuter train offers a maximum speed of 160km/h and an acceleration of 1m/s². It is considered suitable for high-speed passenger services.

There are plans to create a new London north orbital passenger railway by reopening the line between Oxford and Bletchley (for Milton Keynes) for regular use.

The traction system for the train features an insulated gate bipolar transistor (IGBT) convertor device and induction motors. The train’s regenerative breaking system allows for a 12% reduction in energy consumption and carbon emissions compared with other electric rolling stock.

The AT-200 is fitted with an onboard diagnostics system to constantly monitor the train’s performance and give real-time feedback to the maintenance team for inspection and maintenance related issues.

The commuter train is fitted with an automatic warning system (AWS) as well as a train protection and warning system (TPWS) that complies with the European Train Control System (ETCS) level 2 signalling.

The new AT-200 trains from Hitachi Rail incorporate aesthetically designed interiors and a number of features aimed at providing passenger comfort and safety.

The bogies feature cantilever seating arrangements and offer sufficient luggage storage capacity for commuter travel, while allowing for quick and effective cleaning and maintenance. Apart from providing regional transverse seating for second class travellers in a 2 + 2 seating format, the AT-200 offers first class facilities consisting of reclining seats arranged in a 2 + 1 seating format.

The toilets are designed to be universally accessible. LED lighting and air conditioning is provided throughout the train. USB and power sockets are made available at every seat, and Wi-Fi facilities are also provided.

The passengers are informed about the progress of the journey through mounted LCD monitors in every coach, which are also used for advertisement purposes.