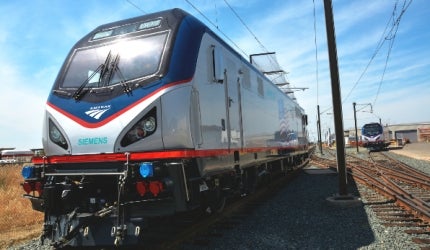 Amtrak Cities Sprinter (ACS-64) is an advanced electric locomotive designed and built by Siemens for the US passenger rail operator Amtrak.

Amtrak awarded a contract worth $466m to Siemens in October 2010 to deliver 70 ACS-64 units. The order marked the beginning of Siemens’ entry into the American locomotive market. The procurement was financed with a Federal Railroad Administration’s (FRA) loan under Railroad Rehabilitation & Improvement Financing (RRIF) that will be repaid with NEC revenue.

"The first unit of Amtrak Cities Sprinter was unveiled in May 2013."

The new locomotives will be operated in Amtrak’s Northeast and Keystone Corridor lines as part of the company’s fleet rejuvenation initiative under the $11bn modernisation programme. The new Cities Sprinters will replace the electromotive diesel locomotives that have been in operation since 1978 and 1988.

The first unit of Amtrak Cities Sprinter was unveiled in May 2013. The first three of the 70 new locomotives ordered are scheduled for comprehensive testing in 2013. Two of them will be tested at the US Department of Transportation facility in Pueblo, Colo, and one on the Northeast Corridor.

The 70 new locomotive units will be delivered in phases by 2016.

The Amtrak Cities Sprinter is suitable for high-speed commuter and long-distance passenger services on regional and intercity routes. It has been designed as an energy efficient and high performance locomotive incorporating features from Siemens’ Eurosprinter and Vectron product lines.

Amtrak Cities Sprinter offers a power output of up to 6.4MW capable of pulling 18 train cars at a maximum speed of 200km per hour. It allows the trains to operate in closer headways with increased passenger capacity. The locomotive also provides 1,000kW of onboard power for interior lights and air conditioning.

Amtrak Cities Sprinter is equipped with a regenerative braking system that feeds back 100% of the generated energy during braking into the power grid. Other features of the locomotive include safety, reliability and low maintenance costs.

Design of the Amtrak locomotive

The locomotive’s design complies with the FRA’s latest safety and crashworthiness standards. The new locomotive body features a crumple zone designed for crash absorption during collision. It has a safety cage for driver’s protection during crash. The locomotive design also integrates the anti-climber feature for safety.

North East Corridor (NEC) is a 457 mile (735.5km) railway line connecting highly urbanised areas in the United States. It is the busiest railroad in North America, stretching from the north to the south and passing through eight states. It starts from Boston, Massachusetts, and ends at Washington, D.C., via New York, and linking several intermediate cities to the District of Columbia.

The locomotive is designed for easy maintenance and servicing. The traction motors and the wheel, for example, can be taken out independently for replacement without lowering the bogie.

Another notable feature of Amtrak Cities Sprinter design is the provision of dual auxiliary inverters, which ensure constant onboard lighting and air-conditioning even if one inverter fails.