Siemens has delivered the first Vectron locomotive built for a broad gauge rail in Helsinki, Finland.

This advanced locomotive has been brought to Finland for testing purposes. It is equipped with instrumented wheelsets to deliver operating data to technicians.

Using the recorded test data, Siemens will manufacture a modified version of this locomotive type that is suitable for northern conditions. The new vehicles will be delivered under a contract with Finnish Railways VR Group.

"The new electric locomotives will improve the efficiency and environmental-friendliness of VR Transpoint’s goods transport."

"A greater proportion of goods transport can be handled using electric power. Thanks to electric locomotives, trains on VR’s passenger transport will be moving faster, more securely, and with greater energy efficiency."

The first serial locomotive under the contract is expected to be delivered in 2016.

Followed by the test runs in early 2016, the first ten locomotives are scheduled to start commercial operations in 2017.

Siemens said all the 80 locomotives are expected to be delivered by 2026.

In December 2013, Siemens secured a contract worth more than €300m from VR Group to deliver 80 broad gauge locomotives.

The order also included an option for an additional 97 locomotives, as well as the maintenance of the locomotives over a period of ten years.

In a recent development, Siemens expects to secured an order from the VR Group to deliver additional 80 electric Vectron locomotives. 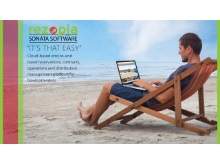