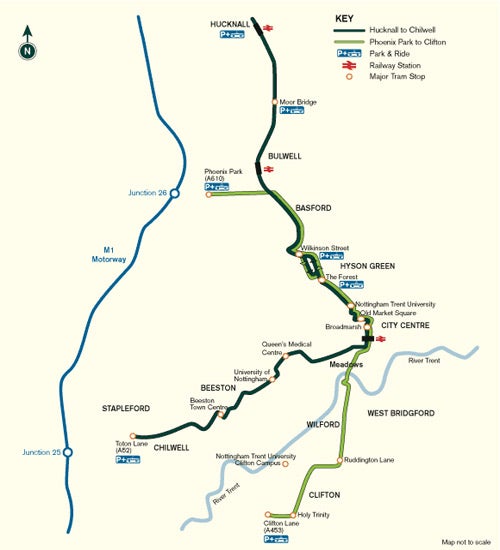 The UK Government has allocated funds for the Nottingham tram project allowing construction to start on the £570m network extension.

The UK Department for Transport will provide £371m in funding for the construction of two new lines, which will extend the tram system to Chilwell and Clifton linking directly into Line One at Nottingham Station.

The UK Transport Minister Norman Baker said, "I am delighted that we are able to finally approve funding so that construction of phase II of the tram system can begin.

"These extensions provide the opportunity to build on that success of Line One and give people in the south of Nottingham quicker, more convenient access to the city centre as well as providing an alternative means of accessing the city centre for people commuting by car," he added.

"They will also help to regenerate sections of the city and support the government's wider growth agenda by providing better access to local jobs, and our environmental priority of cutting carbon by encouraging modal shift."

Funds from the UK Government will allow Nottingham City Council to complete the remaining contractual agreement for the construction can start in January 2012.

Remaining funds for the project will be provided by Nottingham City Council largely from funds obtained from a Workplace Parking Levy.

Construction on the main tramway will start in March 2012 and the Nottingham Express Transit phase II is expected to be operational in late 2014.

Councilor Jane Urquhart, the portfolio holder for planning and transportation at Nottingham City Council said, "After ten years in planning and development, alongside the innovation of the Workplace Parking Levy - our ambitious proposals to add two more lines to our tram network will now be realised. "

Under the agreement Tramlink Nottingham will also take over the operation of one of the existing lines as part of a 23-year concession.

Alstom has a €350m share in the consortium and will be responsible for building the new tram lines, power and signaling as well as supply 22 Citadis trams and their maintenance along with the existing fleet of 15 Adtranz Incentro trams.

Stadler to deliver up to 80 Tramlink trams to Milan