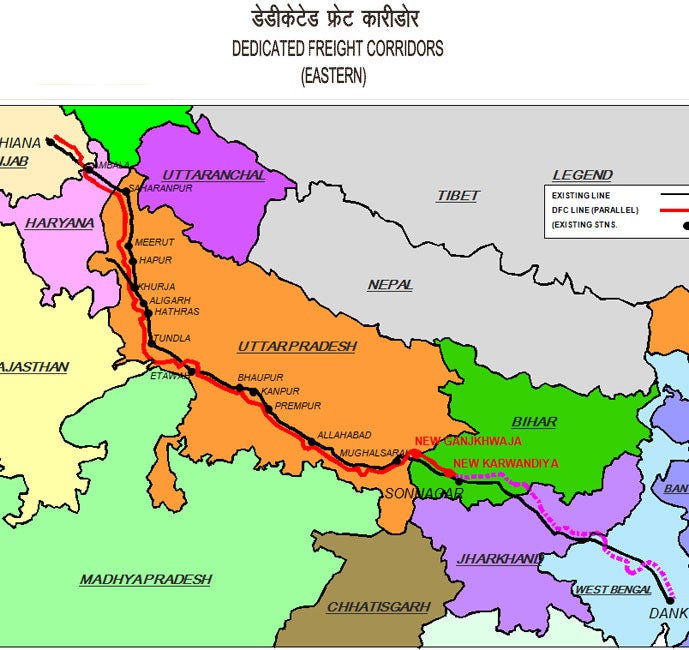 The Indian Government is planning to complete a 66km section of the Rs800bn ($16bn) dedicated freight corridor (DFC) project by early 2014.

The section between Mughalsarai and Sonnagar in the western corridor could be commissioned by 2014 with civil works to be completed by December 2013. Indian Railways plan to build two freight corridors spanning 3,300km comprising of the western DFC and eastern DFC by 2017.

The DFC project, which will now be monitored by the Prime Minister’s Office, has been delayed due to funding constraints at Indian Railways. The eastern corridor, with a route length of 1,839 km, will start from Ludhiana in Punjab, run through the states of Haryana, Uttar Pradesh, Bihar and end at Dankuni in West Bengal.

The western corridor will cover about 1,483km from Dadri to Mumbai, through the states of Delhi, Haryana, Rajasthan, Gujarat and Maharashtra. Currently, civil work on the 66km section is in progress and pre-qualification tendering process for electrical, signal and telecommunication work is underway alongside work on about 52 bridges on the western corridor.

The project involves construction of a double electrified rail track with two 25 kV AC 50Hz overhead catenary systems, which will increase the axle-load limit from 22.9t to 25t as well as allow trains to ply at a speed of 100km/h.

Dedicated freight corridors will ease congestion and reduce travel time for passenger trains as well as increase rail transport capacity, improve service quality and create higher freight capacity. Traffic studies carried out by Indian Railways revealed that the existing routes on the western corridor carry 25 to 35 freight trains a day on the different sections, are already saturated and are incapable of meeting future transit needs.

By providing higher speeds of 100kmph and higher per train throughput capacity, a high axle load of 25-tons per axle, the western DFC is expected to generate additional capacity to handle about 120 freight trains in each direction each day.

Furthermore, as trains running on the DFC will not be overtaken by other passenger trains, they will have uninterrupted runs and be able to achieve average commercial speeds of 60kmph or more.

Image: The eastern corridor will be a 1,839km freight rail line starting from Ludhiana in Punjab running to Dankuni in West Bengal. Photo: DFCC.