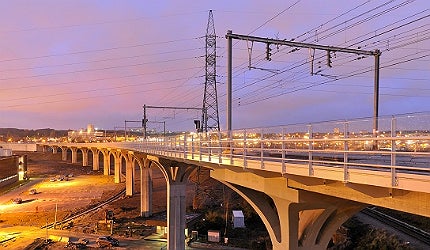 Two days after the Queen of England’s Diamond Jubilee celebrations, Belgium had its own reason to be patriotic when King Albert II opened the final link in the €678m Diabolo, a rail network which now connects Brussels National Airport to major cities in Europe.

The King arrived at the refurbished station onboard a train specifically designed for the event on 7 June and inaugurated the northern link to the underground project, which includes new tunnelled rail lines to connect the airport with the new Brussels to Antwerp High Speed line.

Under construction since 2005, the project is connected to the rest of the network by triangular junctions at each end, resembling the shape of a string-spun top, commonly known as a diabolo.

It is hoped that with this new connection, 40% of airport journeys will be made by rail by 2015.

"From Mechelen it now takes about ten minutes to get to the airport by rail; from Antwerp around 30 minutes."

The Diabolo project includes the new Line 25N between Schaarbeek and Mechelen which provides a second pair of tracks to extend the existing Line 25 from Brussels to Antwerp.

From there, passengers can use the Belgian high speed line, the first international high-speed network with trains travelling to Paris, London, Cologne, Rotterdam and Amsterdam.

The bridge span connecting this section to the existing line was placed in May 2009 and was officially opened, along with the northern link, by King Albert in June.

The northern link sits between this line and according to Infrabel, constitutes the next important step in improved access of Brussels Airport by rail.

From Mechelen it now takes about ten minutes to get to the airport by rail; from Antwerp around 30 minutes – either way, passengers save 30 minutes in travel time.

The €388m LN25, which runs along the central reservation of the E19 motorway, was designed and built by engineering company TUC Rail and largely funded by railway infrastructure manager Infrabel, with a €15m EU contribution.

The first step in completing the Diabolo involved the construction of the €24m Nossegem Curve, or the eastern link.

"Following the commissioning of underground network, Infrabel is now working on two other airport-connected railway projects."

This line, which opened in 2005, includes two one kilometre tracks which connect the airport with the four-track alignment of Line 36, which takes passengers to the Belgium cities of Leuven, Limburg and Liège.

The curve saves passengers from Flemish and Walloon Brabant, Limburg and Liege between 15 and 40 minutes in travel time to and from the airport.

Two single-track tunnels shafts, for the entire underground connection, which lies 16.5m below Brussels Airport, were excavated using a computer and laser-driven boring machine at separate times, ensuring air traffic was not hindered.

Infrabel connected the tunnels to a new underground rail and renovated Brussels-National-Airport station, which consists of three extended platforms each measuring 425 metres.

"It is hoped that with this new connection, 40% of airport journeys will be made by rail by 2015."

Following the commissioning of underground network, Infrabel is now working on two other airport-connected railway projects.

In the north, the company will construct a railway bypass by 2016, which will connect to Line 25N and Diabolo. This is expected to increase passenger numbers on the Brussles – Antwerp – Netherlands routes.

Infrabel will build two tracks and two new platforms at the back of the Mechelen station to make the connection.

Also in the frame is the proposed Tunnel Watermael – Schuman – Josaphat railway link which will provide faster connections to Shuman, Luxembourg and Brussels airport by 2015.