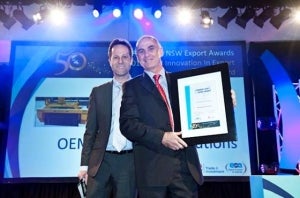 OEM Technology Solutions was nominated for the NSW Innovation in Export award at this year’s 50th Anniversary Premiers NSW Export Awards. Competing against four other brilliant companies who’ve enjoyed great success on the international stage, we came through with the win James McLeod, CEO was there to accept the award and he came home with quite a large framed certificate and trophy.

"The companies nominated have made innovation an integral part of their exporting process. This award will go to a company that highlights new and creative strategies to help build and sustain their export business. The award is judged across all industry sectors."

OEM Technology Solutions is a High Technology Australian engineering and manufacturing company supplying electronic products to the international railway industry and as such was honoured with the NSW Premiers Export in Innovation award.

Since a decision to exhibit at the Innotrans 2008 trade show in Berlin where they showcased the PC3 Series Programmable Controller to the world, OEM has grown an average 48% year on year despite the Global Financial Crisis.