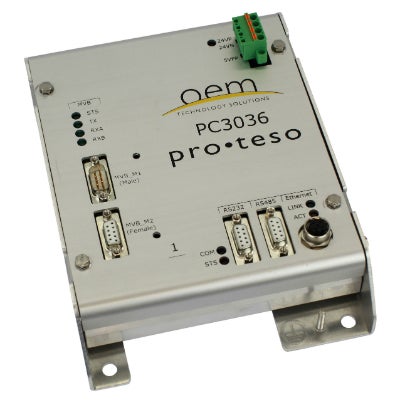 OEM Technology has taken train fleet management to a whole new level with the release of a programmable controller that will allow older fleets using MVB-EMD to be remotely monitored using cloud based systems.

These include the company’s in-house developed cloud system and a recently released new MVB module, regarded as one of the smallest, most sophisticated and cost-effective MVB modules in the world.

The card can be supplied with all the interface types required by the industry and complies with all standards including ESD+ and OGF.

OEM R&D Manager, Phil Solomon, said that like the MVB module, the controller had been entirely developed in house.

Mr Solomon said: "The controller was specifically developed for retrofitting to existing fleets in order that they can enjoy the same benefits of remote monitoring as new fleets.

"Condition based, real time monitoring and reporting of everything from HVAC to brakes has been proven to generate massive cost savings, not to mention operational and safety improvements.

"In Australia alone at the moment, there are many retrofit projects at tender stages. The awareness of the benefits here and throughout the world is immense.

"Having the market’s only controller designed for cloud based monitoring is a big advantage in today’s market where so many operators are seeking the means of introducing improved safety and efficiency into their older fleets."