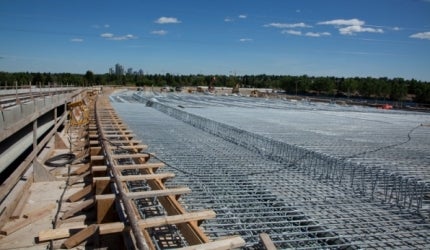 The 8.2km West LRT runs between downtown and 69 Street SW. The construction of the line started in October 2009 and was completed in December 2012.

The line serves communities located west of the downtown. It has six stations which include Sunalta, Shaganappi Point, Westbrook, 45 Street, Sirocco and 69 Street.

"The City of Calgary Council is the owner and operator of the line."

The LRT project was initiated to fulfil the transit requirements of the area in the next 20 years. The City of Calgary Council is the owner and operator of the line. The area had a population of about 1.38 million in 2012, which is expected to reach approximately 1.6 million by 2022.

Commercial services on the West LRT started in December 2012. The estimated investment on the project was $1.4bn, funded by the Government of Alberta ($1.3bn) and the City of Calgary ($1m).

The functional study on West LRT was prepared in 1983 and approved by the council in 1987. An updated report prepared in 1990 recommended that the city of Calgary construct the line in a single stage.

The city council approved the rail line project and funding in 2007. The LRT project was launched and acquisition of lands began in February 2008. The city administration approved revisions to the alignment of the line in June 2008.

Construction of the West LRT

The West LRT design-build contract was awarded to SNC-Lavalin Constructors in October 2009. The construction started in February 2010.

The Ottawa light transit system (OLTS) is a pilot light rail transit (LRT) project underway in the capital city of Canada. The OLTS, also known as the O-Train, is currently operating with a single line. The OLTS is operated by Ottawa’s OC Transpo under the name of Capital Railway.

Assembling of the launching truss for construction at the elevated guideway, from Shaw Millennium Park to the Crowchild Trail, was completed in May 2010. Construction on the interchange began with the opening of Sarcee Trail detour road in June 2010.

The first segment of the elevated guideway in Shaw Millennium Park was completed in July.

The external envelope of the new West Calgary High School was completed in September 2010. The centre pier on LRT bridge over the Sarcee Trail was completed in October 2010. Construction of two bridges at 42nd Street and 45th Street SW were completed at the end of 2010.

The speed limit throughout the construction period was 50km/h.

The contractors involved in the construction of West LRT included SLG, a joint venture of SNC-Lavalin Constructors and Graham Construction. SLG was assigned to complete the elevated guideway from downtown Calgary to Bow Trail.

The scope of work included construction of a 1.5km stretch consisting of 36 piers, 444 precast segments and one bent structure. It was completed in May 2011.

MMM Group and Read Jones Christoffersen Consulting Engineers were part of the SNCL team which was awarded the design-build contract for the West LRT line extension.

"The line serves communities located west of the downtown."

DEAL provided the launching truss for the erection of precast segments. DYWIDAG Systems International supplied the necessary stressing jacks as well as the multiplane anchorage system.

Goodco Z-Tech supplied bearings and expansion joints. SIKA and Symons Dayton Superior were the epoxy suppliers. Prepackaged grout was supplied by Target and precast producers are Con-Force and Armtec.