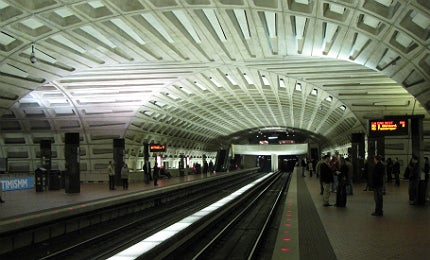 Washington has a residential population of more than 600,000. With a traffic flow of more than one million during the week, Washington faces heavy congestion. The city has the Metrorail and Metrobus serving 3.5 million commuters within 1,500 square miles.

The counties that are served by the metro system include Montgomery County and Prince George’s County in Maryland and Fairfax County, Arlington County and the city of Alexandria, Virginia.

The first phase of the sixth line opened in July 2014 and covers Tysons and Reston.

The construction of the Metrorail system began in 1969 and its first phase was opened on 27 March 1976, while the final work of the original 103-mile rail network was completed in 2001. The project’s phase one construction work took six years and three months to complete.

Out of the total length of the metro system, 50.5 miles is subway while the aerial and the surface tracks are 46.31 miles and 9.22 miles long respectively. The metro subway system integrates 47 stations, the surface system integrates 33 stations and the aerial system connects six stations. Among the Metroline stations, Forest Glen is the deepest station at a depth of 196ft. The distance between the street and platform can be covered in fewer than 20s in high-speed lifts.

The Metrorail project has six metro lines. Blue, Green, Orange, Red and Yellow have already been constructed and Silver is under construction.

The Blue line connects 27 stations and traverses through Fairfax County, Alexandria and Arlington, Virginia, the District of Columbia and Prince George’s County, Maryland. It has been operational since 1977.

WMATA undertook a $177m renovation project for the Red line in July 2009, which included improvements to the automatic train controls and tunnel ventilation systems, replacement of tunnel lighting systems and repairing the station walls. The renovation was completed in mid-2013.

The Orange line is 31.3 miles (50.4km) in length and connects 26 stations. The counties served by the Orange line are Fairfax County and Arlington, the District of Columbia and Prince George’s County. It has been running since 1978.

The Yellow line connects 17 stations and traverses through Fairfax County, Alexandria and Arlington, and has been operational since 1983. Meanwhile, the Green Line connects 21 stations in Prince George’s County and was opened in May 1991.

In 1980, a bill was signed by President Carter to complete the construction of the Metrorail. The Stark-Harris bill passed $1.7bn in federal funds for the project.

Infrastructure of the rapid transit system

The Red line connects different places in the northern region. Its structure is in a narrow U shape, with Shady Grove and Glenmont stations at the terminus. Internally, the line has two routes, the Shady Grove Route and the Glenmont Route, both starting at Metro Center. The Red line does not share its stations with any other line.

The Orange line is an east-west line with Vienna / Fairfax-GMU and New Carrollton stations at the terminals. The line shares half of the track / stations with the Blue line and two thirds of the track will be shared with the under-construction Silver line.

The Blue line is a south-east line connecting Franconia-Springfield and Largo town centre. A number of stations are shared with the Orange and Yellow lines, with eight stations belonging exclusively to the Blue line.

The Green line is C-shaped with terminals at the north-east and south-east points. The terminals of the line are Branch Ave and Greenbelt stations. The line shares a number of stations in Washington with the Yellow line.

The Silver line is an east-west line with Largo Town Center and Wiehle Avenue Station as terminals. Once completed, the line will share its track with a few stations on the Orange and Blue lines.

A crash-avoidance system was developed and put to testing for the Washington Metro by ARINC. The system monitors tracks and aids in automatic train control to avoid train collisions.

Verizon Wireless is the only communicating medium that works while the Metrorail traverses through the tunnel. The Metrorail system has two-way radios between train operator and the operational control centre (OCC). The system also has hotlines to communicate from OCC to police and fire departments. In addition, the system has various communication and safety systems, including an automated electronic fire protection system. Intercoms are also installed in rail cars, lifts, platforms and landings.

The subsystem ATP controls operations including interlocking, train separation and door operations and the ATO controls the operations of the automatically running trains.

Rolling stock on the Metrorail system

The operating fleet of the Metrorail system consists of 1,104 railcars manufactured by Rohr, Breda, CAF and Alstom. Metrorail operates six and eight-car trains, as the system can only handle trains with an even number of cars.

"The city has the Metrorail and Metrobus serving 3.5 million commuters within 1,500 square miles."

The existing fleet is set to be replaced with 748 7000-series cars and 100 cars of the Breda 4000-series fleet are to be restored. The plan focuses on using optimised procurement methodology and a modern design to produce railcars.

The railcars running on the Metrorail system are self-propelled, single level and electrically powered. They are a common-design passenger type, with a passenger capacity of 175 passengers. The length of the railcar is 75ft, while the width and height are 10.16ft and 10.83ft respectively. The maximum operating speed of the trains is 59mph while the average is 33mph, including stops.

In February 2010, WMATA awarded a $6m contract to Harsco Corporation’s rail unit for the construction of utility vehicle (UTV) prime movers. The construction of UTVs was carried out at Harsco Rail’s track maintenance engineering and production facilities in Columbia, South Carolina.

The UTVs power work trains that are engaged for railway maintenance including snow removal, rail repair and replacement and supplying power for hydraulic and pneumatic tools.

The Silver line is 23 miles (37km) long and will include 11 stations. It will serve Loudoun, Fairfax and Arlington counties and the District of Columbia. The first phase is 11-miles long with five stations.

Scheduled to open in 2018, Phase II will consist of six stations, three in Fairfox County and three in Loudoun County, including Dulles Airport, and will be 11.4 miles (18.3km) long.

Also known as Dulles Corridor Metrorail project, the Silver line is being built by the Metropolitan Washington Airports Authority (MWAA) in collaboration with Dulles Transit Partners. The line is estimated to cost $2.6bn. Bechtel was awarded the contract for construction of phase one of the Silver line. The Phase II construction is being led by a joint venture named Capital Rail Constructors, comprising Clark Construction Group and Kiewit Infrastructure South Co under a $1.17bn contract.

The light rail system, Dallas Area Rapid Transit (DART), is to be doubled in size during the next decade following agreement on a $2.4bn investment programme.