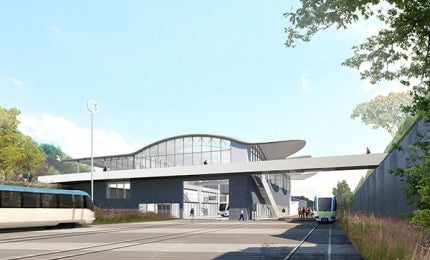 A new very light rail (VLR) innovation centre and rail line has been proposed for Dudley, UK. The project will connect the town with the national rail network for the first time in more than five decades.

The new line will comprise two tracks, one for pilot testing of VLR vehicles manufactured at the centre and the other for passenger services. The project is expected to generate approximately 50 jobs during the initial manufacturing phase, which will be enhanced following the start of operations.

"The project is expected to generate approximately 50 jobs during the initial manufacturing phase, which will be enhanced following the start of operations."

The project is being overseen by the Dudley Metropolitan Borough Council and Warwick Manufacturing Group (WMG) of the University of Warwick. The VLR technology is being developed by Revolution VLR, a consortium led by Transport Design International (TDI) and comprised WMG Innovative Solutions, Unipart Rail, Prose and Trelleborg.

The new innovation centre will be situated at the site of the old Dudley Train Station in Castlehill. The new track will stretch from the innovation centre to the Dudley Port station, providing connections to major public areas, including the Birmingham City Centre, Dudley town centre, Dudley Zoo and Black County museums.

A £4.5m (approximately $6.9m) fund has been earmarked for the construction of the rail line through The Black Country Local Enterprise Partnership’s Growth Deal. The remaining amount will be met through European funding, private sector investment and contributions by the Dudley Council.

The project is a result of the £1.6m (approximately $2.4m) financial support received by Revolution VLR in November 2013 from Enabling Innovation Team (EIT) of the Rail Safety and Standards Board (RSSB) by participating in EIT’s Radical Train challenge.

The programme constitutes a series of rail upgrades in the north of the UK to provide better connectivity, faster journey times and improved capacity.

The fund was awarded to Revolution VLR to design and build an affordable low-carbon radical train demonstrator for providing low-cost connectivity to regional and rural areas. Revolution VLR was one of the first four of eight finalists to have received financial support by participating in the challenge.

The new VLR innovation centre will develop and test the VLR prototype vehicle. The building will feature a triple-height engineering hall, a reception area, an office space for 45 people, R&D laboratories, meeting rooms, exhibition spaces, an auditorium and a cafe.

The new VLR vehicle will be designed and constructed with data acquired from the existing PPM Class 139 rail car operated by Pre-Metro Operations, which links Stourbridge town to the Stourbridge Junction. A typical VLR vehicle has a weight of less than one tonne for each linear metre.

The first demonstrator railcar will be a bi-directional, 18m-long unit providing a passenger capacity of 120 people. The VLR will feature a self-powered bogie integrating an integral hybrid propulsion and kinetic energy recovery system as well as a modular and composite bodyshell design. Off-the-shelf components are expected to be used to reduce the overall manufacturing and operational costs.

The VLR project also aims at evaluating the application of existing heavy rail safety standards to VLR railcars and presenting a discussion paper for evaluation by the Radical Train stakeholders.

The feasibility study for the innovation centre was performed and completed by Cullinan Studio in December 2014. The basic feasibility work to study the cost of re-opening the old track was performed by Mott McDonald under the instruction of Centro.