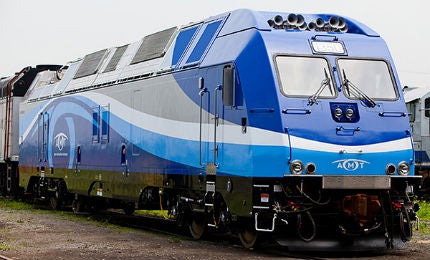 Train de l’Est (or the Mascouche Line) is a new commuter rail line under construction in the Montreal metropolitan area in Quebec, Canada. The 52km-long line will connect Montreal’s Central Station with Mascouche, a suburban city located north of Montreal in southern Quebec.

Train de l’Est, with 13 stations along its route, will provide public transit services for Montreal East and the north-eastern municipalities such as Repentigny, Terrebonne and Mascouche.

Agence métropolitaine de transport (AMT) is developing the project with an estimated investment of $671m. Transports Quebec, the Transport Ministry of Quebec, is financing 75% of the project cost, while the rest 25% is borne by AMT.

Construction of the project was more than 80% complete as of January 2014. The line is expected to open for service by the year end. The daily ridership on the new route is projected at 11,000.

The line will start in Mascouche and pass through suburban areas such as Terrebonne, Repentigny and Charlemagne before running for approximately 30km on the existing Canadian National (CN) railway tracks. After passing through Ahuntsic, the line runs for 9km on AMT’s existing Deux-Montagne commuter line that enters downtown Montreal through the Mount Royal Tunnel.

Metro de Paris is a rapid transit metro system serving the capital city of Paris within the Île-de-France region, France.

A garage and a shelter for parking the Train de l’Est trains will be located at the terminal station Mascouche. The other nine new stations include Terrebonne, Repentigny, Pointe-aux-Trembles, Rivière-des-Prairies, Anjou, Saint-Léonard-Montréal-Nord, Saint-Michel-Montréal-Nord, Sauvé and Ahuntsic.

The Train de l’Est commuter line will use Bombardier’s double decker passenger cars capable of operating on both diesel and electric power. The travel time between Mascouche and Montreal using these trains is estimated to be 62 minutes.

Bombardier was awarded a contract by AMT in December 2007 to supply 30 double-decker passenger cars for the Train de l’Est commuter line. AMT also awarded Bombardier a contract in August 2008 to supply five dual-mode locomotives to be operated on the line.