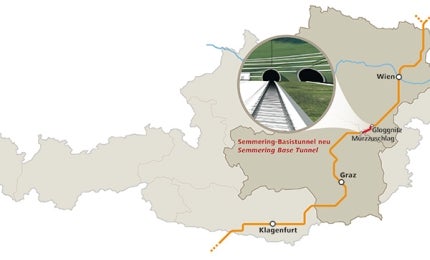 The twin-tube Semmering base tunnel will connect Gloggnitz with Mürzzuschlag, Styria, Austria. The tunnel will be part of the Baltic-Adriatic railway corridor and is one of the most important large-scale infrastructure projects in Central Europe.

Once completed, the 27.3km-long tunnel will become one of the world’s longest railway tunnels. Site preparation and other works at the Semmering base tunnel began in 2012. Construction work started in January 2014 and is expected to be completed in 2024.

Austrian Federal Railways (ÖBB) was commissioned to develop the tunnel with an estimated investment of $4.37bn (€3.3bn).

Built between 1848 and 1854, the Semmering rail line is the first railway to cross the Alps. It is listed as a historic monument and nominated as the World Heritage Site by UNESCO. A total of 70,000 goods and passenger trains currently run through the mountainous route each year, making it one of the busiest routes in Austria.

"The tunnel is one of the most important large-scale infrastructure projects in Central Europe."

The new tunnel will comprise twin parallel bores, each with a 10m diameter, separated by up to 70m and connected at maximum intervals of 500m by cross-passages. The tunnel will enable trains to travel at a speed of 250km/h and is expected to reduce the travel time between Vienna and Graz by 30min.

The tunnel is designed with a shallow inclination (a gradient of 0.85%), which allows for the transportation of heavy freight trains using a single locomotive.

The Gloggnitz and Mürzzuschlag railway stations will be integrated with the newly constructed route. Additionally, the B27 road will be relocated and flood protection measures will be taken along the Schwarza River as part of the project.

The single-track tunnel tubes are being constructed through three contracts, SBT 1.1, SBT 2.1 and SBT 3.1. The 13km-long central section (SBT 2.1) is currently being constructed and involves tunnel boring for a length of 8.6km and drill and blast method for the remaining 4.3km section. The central section will consist of 26 cross-passages and an emergency stop station with two 400m ventilation shafts.

Covering a total length of 14.4km, the remaining two sections are yet to be contracted.

Three intermediate sites at Göstritz, Fröschnitzgraben and Grautschenhof will be established during the construction. Conventional tunnel excavation methods will be used at the Göstritz site. A 1,000m gallery and 250m-deep shafts will be installed at the site.

Two shafts with a diameter of 22m will be installed at a depth of 400m at Fröschnitzgraben. The tunnel boring machines will excavate the tunnel from the emergency stop towards Gloggnitz, to be built at the foot of the shafts.

The idea of the Brenner Base Tunnel is to reduce the amount of heavy-load traffic on roads by shifting some to rail.

A 1,300m-long access gallery will be built at the intermediate site between Grautschenhof and Fröschnitzgraben.

In the initial stage of construction, hydro-engineering works for flood prevention will be conducted on Schwarza in Gloggnitz region. The works will comprise the construction of two new railway bridges, a new road bridge and an underpass for the B27 trunk road.

Additional major works will include the construction of entrances in Gloggnitz and Mürzzuschlag, temporary access roads, an auxiliary bore and ventilation shafts at Trattenbach and Sommerau.

The Gloggnitz and Langenwang substations are expected to supply electricity for the trains running through the Semmering base tunnel.

Contractors involved with the Semmering base tunnel development

The contract for the construction of the 13km-long central section of the Semmering base tunnel was awarded to the consortium of Implenia and Swietelsky. The contract is valued at approximately €623m ($827m).

Amberg Engineering was awarded the contract for conducting tunnel excavation works, while Strabag was engaged to conduct drilling.

ÖBB contracted the Werner Consult and Witrisal consortium to conduct the route planning for the tunnel.

Gruner was engaged to provide design service for the new twin-tube tunnels. The contractual scope included aerodynamics and tunnel environmental control, as well as operational and emergency ventilation systems.

BGG Consult will provide geotechnical and hydrogeological consulting services during tendering and construction phases as part of a contract awarded in 2010.