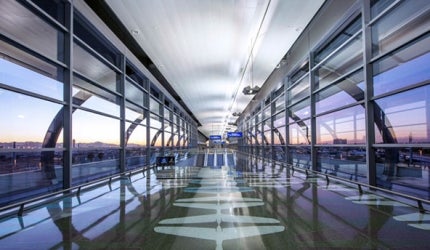 "The airport is among the ten leading busy airports in the USA in terms of passenger flow."

The airport is among the ten leading busy airports in the USA in terms of passenger flow. More than 10,000 travellers arrive and depart at Sky Harbor International Airport on a normal day.

The PHX Sky Train replaces shuttle buses, and thus minimises traffic congestion and pollution at the airport. The train system has been constructed to last for a minimum of three decades.

The Sky Train services will be used by approximately 2.5 million travellers during the initial year of operation, and 14 million per year when fully complete.

Vehicular traffic at PHX has been proportionately increasing with growth of Phoenix city’s population. The airport authorities carried out a detailed study on how to manage the traffic, with several options considered. The study highlighted that expanding roadways was not a practical solution, and that a mass transit system needed to be developed in the city.

The PHX Sky Train System was therefore decided upon as the most viable option for addressing the traffic congestion.

The $1.58bn PHX Sky Train System is being constructed in three stages, with the current route denoting completion of the first stage. The construction work of the first phase led to generation of approximately 6,000 jobs.

The PHX Sky Train System includes a 30m-high bridge running across a taxiway that links the south and north runways.

Three elevated stations, the 44th Street Station, Terminal 4 Station and Economy Parking Station, are included in the first stage of the project. The stations have been artistically designed to have glass murals, terrazzo floors and sculptural ceiling. All the facilities of the project are Gold LEED certified.

The 3,000ac Phoenix Sky Harbor International Airport (PHX) is undergoing an extensive upgrade program between 2005 and 2009. The airport is the fifth busiest in the world, the eighth largest in the US, 14th largest airport in the world in terms of passengers. It is located in one of the fastest-growing cities in the US. Sky Harbor has grown so rapidly that Phoenix is currently using Williams Gateway Airport in Mesa as a secondary airport.

The new Sky Train stations are designed in an elliptical shape to offer protection to passengers from extreme weather conditions. The design has also enabled a 30% drop in steel usage in comparison with regular structures. The 44th Street and the Terminal 4 Stations have air conditioning, while the Economy Parking Station is inclusive of a shaded waiting area and fans.

The 44th Street Station provides for Early Bag check, which allows passengers from Southwest Airways and US Airways to get their bags checked at no added cost.

All Sky Train stations have kiosks where passengers can print their boarding passes.

The funds needed for the execution of the Sky Train System project have been generated from passenger fees and airport revenues.

The trains transport up to 2,000 people in one direction, every hour, at an average speed of 23mph. The trains can reach a maximum speed of 38mph.

"The Sky Train services will be used by approximately 2.5 million travellers during the initial year of operation, and 14 million per year when fully complete."

The composite shell body of the car has tinted windows. The cars are air-conditioned and can also accommodate two wheelchairs, subject to availability of space.

Bombardier Transportation is the construction contractor the PHX Sky Train System. The $255m contract was awarded in 2009. A separate contract was also awarded to Bombardier to take care of maintenance and operation of the system for a decade, subsequent to deployment.

Hensel Phelps was the construction manager for the first stage of the project.