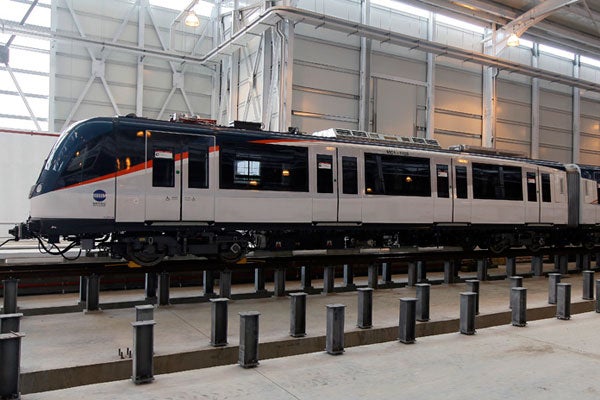 The Panama Metro is a rapid transit system that is under construction in Panama City, Panama. It is the first metro system in Central America.

"The metro system will address the increasing traffic congestion in the city."

Construction of Line 1 of the Panama Metro started in February 2011 and was completed on schedule by February 2014. The line was officially inaugurated in April 2014. It runs from Albrook to Los Andes, and includes 12 train stations. The official groundbreaking ceremony for Line 2 was held in October 2015.

The metro system will address the increasing traffic congestion in the city and is expected to carry approximately 40,000 people an hour by 2035.

The Secretariat of the Panama Metro (SMP) and the Panama Government operate the metro.

Details of the Panama metro

The SMP conducted feasibility and route design studies, collectively known as Red Master Panama Metro plan, for the metro project. The master plan includes the construction of four metro rail lines and a tram covering Panama City. It is expected to be fully operational by 2035.

Line 1 has already been completed, with Line 2 expected to be finished by 2019. Feasibility studies for Line 3 are currently underway, while Line 4 is currently in the planning stage.

Line 1 runs from the Albrook Bus Terminal to the Los Andes Commercial Centre, with a possible extension from Los Andes to San Isidro in the future.

Line 1 included the construction of 7.3km of tunnels, 1.5km of trenches and 4.9km of viaducts. Line 2 will be elevated and built in two phases. Phase 1 will encompass the route from San Migulieto to La Dorba, while Phase 2 will include the route from Albrook to San Migulieto. With a length of 21km comprising 16 stations, Line 2 will have a capacity to serve 40,000 passengers an hour in each direction.

Closed completely in 1996, progress was being made with the return to use of the derelict 784km (497 mile) rail network of Guatemala. The government had taken over the previously private network in 1968, renaming the system Ferrocarriles de Guatemala (FEGUA).

Line 3 will be 26.7km-long, running from Albrook to La Chorrera. It will include 14 stations and pass through a new bridge constructed on the Pacific side of the Panama Canal. Line 4 will run from Albrook to Rana de Oro.

Features of the Panama Metro stations

Rolling stock, signalling and control for the Panama Metro

The Panama Metro is initially operated with 19 trains containing three cars each (57 cars in total), supplied by Alstom. Each car has four doors and six windows. The trains are 52m-long, 2.71m-wide and 3.85m-high.

The trains were delivered by October 2013, and are equipped with Alstom’s Urbalis communication-based signalling and train control system (CBTC) to enable driverless operations. It features an automatic control system to prevent collision between trains.

Financing of the Panama metro

A technical co-operation agreement was signed between SMP and CAF in June 2013, with CAF providing a $1m loan for the feasibility study of Line 2.

The Panama Government signed a financing agreement with the Government of Japan to secure $2.6bn in funding for the Line 3 construction, in April 2016.

A consortium of Pöyry, Cal y Mayor and Geoconsult was selected to provide consultancy and design services for the line 1 of Panama Metro in January 2010.

A consortium comprising Odebrecht (55%), the Fomento de Construcciones y Contratas FCC (45%) and Alstom, known as Line One Consortium (Línea Uno Consortium) was chosen by SMP to build the Panama Metro line 1 in November 2010.

"It is the first metro system in Central America."

Alstom received a €200m ($254m) subcontract from Línea Uno Consortium in January 2012 to provide engineering, electromechanical and other support services for the metro. As part of the contract, Alstom supplied 57 metro cars, traction substations and the CBTC train control system technology for the metro system. The metro cars were manufactured at Alstom’s factory in Santa Perpetua, Barcelona, Spain.

A consortium of TMB, Ayesa and Inelectra provided project management and technical assistance for Line 1 under a €21m ($26.7m) contract awarded in 2010.

Systra received a contract from the Línea Uno consortium to supply civil engineering and design services for Line 1 in January 2011.

A $1.85bn contract to construct Line 2 was awarded to a consortium of Odebrecht and FCC Construcciones. Electrical and mechanical work for the line will be provided by Alstom, TSO-CIM, Thales and Sofratesa.

Alstom was awarded a contract to provide 21 Metropolis trainsets and traction substations for Line 2 in September 2015 as part of consortium with CIM, Sofratesa, Thales and TSO.

In December 2015, Alstom was awarded a €130m contract to provide 70 additional metro cars for Line 1. Deliveries are expected to begin in early 2017. The new Metropolis cars will be designed and manufactured at Alstom’s Santa Perpetua plant in Spain.

CEF
The CEF railway testing centre is a unique platform that...
SUBSCRIBED