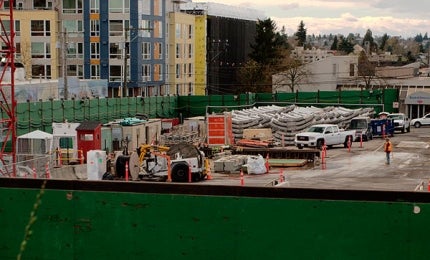 The 4.3 mile-long (6.9km) Northgate Link light rail extension will connect four major urban centres to the existing Central Link, as well as the University link light rail segment to the Northgate business and retail centre in Seattle, Washington, US.

The construction of Northgate Link extension project was initiated by Sound Transit in 2012 and is scheduled for completion by 2021.

The project is expected to increase light rail ridership, reduce travel time and enhance transit capacity of the clogged Interstate-5 corridor. Upon completion, the Northgate link extension will farm part of 36 miles (58km) of new light rail lines extending north, east and south from Seattle and will serve additional 60,000 daily commuters on the regional Link light rail system by 2030.

Ratified by the voters in 2008, the Northgate link extension project is a vital component of the regional light rail transit system.

"The construction of Northgate Link extension project was initiated by Sound Transit in 2012 and is scheduled for completion by 2021."

The project includes construction of 5.15km of twin-bored, soft-ground tunnels, and 1.75km of retained cut fills and elevated structures. Three stations including two underground transit stations at U District and Roosevelt and one elevated station at Northgate, as well as a portal structure and 20 cross-passages are also being constructed.

The project is estimated to attract an investment of $2.1bn and create approximately 20,000 jobs.

Construction of the Northgate link extension project began with demolition activities in the Roosevelt area in late 2012. The building demolition and environmental cleanup works were concluded in 2013. System installation and testing are expected to be completed between late 2018 and early 2021.

The work at Northgate station includes construction of north and south entrances, and an elevated station platform at a height between 25ft and 45ft above-ground. Escalators, elevators and stairs will be installed at each station entrance. A 400ft track will be laid to the north of the station, and covered bike parking, as well as bus and paratransit connections will be constructed.

The construction at Roosevelt station involves building a station platform of approximately 80ft below-ground, construction of two entrances with elevators, escalators and stairs at each entrance, and pedestrian plazas and seating. It also includes installation of ticket vending machines and bicycle storage.

The work at U District station involves construction of a station platform roughly 80ft below-ground, and construction of two entrances along Brooklyn Avenue Northeast. It also includes installation of elevators, escalators and stairs at each entrance, ticket vending machines, covered bike storage, equipment and ventilation rooms, and public art.

The two underground tunnels will be located between the Maple Leaf Portal and the University of Washington Station at Husky Stadium, linking the Roosevelt Station and the U District Station along the way.

The project is a 23-mile extension of the existing 106-mile Metrorail system, which serves Washington DC and parts of Maryland and Virginia.

Tunnel boring machines (TBM) Brenda and Pamela will dig six segments of tunnels between the Maple Leaf Portal and the University of Washington station by mid-2016. The first tunnel segment between Roosevelt Station and the Maple Leaf Portal with 21ft and 6in diameter drill was completed using the Brenda TBM in March 2015.

The project also includes excavation of cross-passages, which are the safety tunnels that will connect the northbound and southbound train tunnels at intervals ranging between 450ft and 800ft.

Jacobs Associates was appointed as the prime consultant to provide project management, design for the tunnel and underground structure, estimation and programming, and geotechnical engineering services.

North Star, a joint venture of Jacobs Consultancy and CH2M Hill, was awarded the construction management contract for the Northgate Link LRT extension in November 2012.

Knox Kershaw
Knox Kershaw Inc is a leading designer and manufacturer of...

Harsco Rail
Harsco Rail, a division of Harsco Corporation, is a major...
SUBSCRIBED