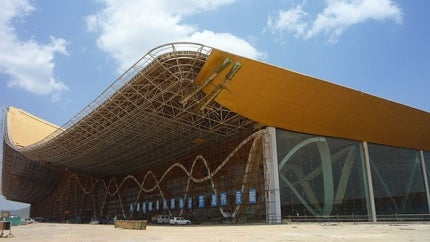 The development of a rail transit system in Kunming, which has long been affected by traffic congestion, has been planned since the late 1990s. The KRT project was announced in 2009, with construction beginning later that year. The first line of the metro (line 6) was opened in June 2012.

The Kunming Metro will improve transportation in Kunming city centre and act as the backbone of north-south transport routes. Once fully operational, Kunming Metro will carry 3.7 million passengers a day, which is 1.6 times that of the city’s current public transport.

"The Kunming Metro will improve transportation in Kunming city centre and act as the backbone of north-south transport routes."

The Kunming Metro was originally planned to include two lines, but four further lines were added to the project. Lines 1 and 2 constitute the first phase of the metro project.

The 34km-long Line 1 will run from Kunming city centre to the Kunming Radio and Television University in Chenggong New City. It will include underground sections in Kunming and Chenggong and is expected to cost $4.5bn.

Line 2 will be the 22km north-south backbone of the system, connecting the North Bus Station with Fubao Station in the south. Line 3 of Kunming Metro will run from Shizui to the East Bus Station, while Line 4 will continue from Dapuji to Bailongtan. Line 5 is expected to link Expo Gardens and Dianchi Tourism Resort Area. Line 6 connects the city centre with the new Kunming Changshui International Airport.

Line 6, which is an elevated express line to the new Kunming Airport, was completed by mid 2012 and was opened to public in June 2012. The entire system, comprising six lines, is expected to complete by 2018.

All rail lines constructed within Erhuan Lu will be underground. The Line 1 and Stage 1 of Line 2 with a combined length of about 42km will include the construction of 25 underground stations and six over-ground stations.

China Railway Construction Corporation (CRCC) is the primary contractor for the project.

The signalling system for the first phase of Kunming metro is provided by CASCO. The Urbalis 888 signal system is based on the innovative design of CASCO. The design meets the high-traffic, high-density requirements of Chinese urban rail transport. Suitable for shorter driving intervals, the system delivers superior performance, greater security and reliability.

The Urbalis 888 system has been successfully implemented for the lines in Shanghai, Beijing, Shenzhen and other subway lines in major cities of the country.

The EMU debugging for the first phase of the southern section of Kunming subway was successfully completed in August 2012. It involved verification of the performance of the signalling and communications, rolling stock and ground equipment.

The first phase of the southern section of the Kunming Metro will be operated using an autopilot system for automated train operations.

Rolling stock for the Kunming Metro

The rolling stock for Line 6 was manufactured by China South Locomotive and Rolling Stock Corporation (CSR) Zhuzhou. Each car incorporates an all-welded aluminium alloy V-shaped body. The six-car trains powered by DC750V contact rail will operate at a maximum speed of 100km/h. Each train will accommodate up to 1,870 passengers.

Vehicles are provided with energy saving air-conditioners, LED lighting systems and other low-carbon, green initiative equipments. The cars are fitted with double-layered reflective glass to shield against high-altitude sunlight.

The rolling stock of Type B trains for the Lines 1 and 2 will be supplied by CSR Zhuzhou by November 2013.