West Oahu with downtown Honolulu and Ala Moana Center

300 people on each train

Expand
Route of the Honolulu high-capacity transit corridor project, which will link West Oahu with downtown Honolulu and Ala Moana Center.
The city of Honolulu has a population of 905,034 and is growing steadily – hence the need for an improved transportation system.
A large-scale solution was needed to reduce the number of vehicles on the road and to cater to the growing transportation needs of Honolulu. 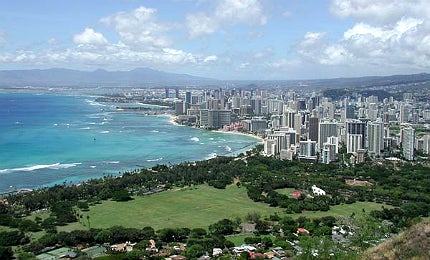 Is your current system outdated? Are your project teams frustrated? Don't have the time to change? Complexity is growing across all areas of construction. Now is the time to challenge the status quo.
by Oracle
Thank you.Please check your email to download the eBook.

The Honolulu high-capacity transit corridor project includes construction of a 20-mile elevated rail line linking West Oahu with downtown Honolulu and Ala Moana Center. The project is estimated to cost $5.28bn and is scheduled for completion in 2019. The federal government is providing $1.2bn towards the project.

The city of Honolulu has a population of 905,034 and is growing steadily. Currently buses, boats and private automobiles are used to fulfil the transport needs of the people in the city. However, traffic congestion had increased to a large extent in recent times in the project corridor.

"The rail transit system will later extend up to Honolulu International Airport, Waikiki, the University of Hawaii-Manoa and Kalaeloa."

A large-scale solution was needed to reduce the number of vehicles on the road and to cater to the growing transportation needs of the city. A rail transit system was considered as the best option for solving the transportation problems caused due to space constraints in the city.

The project is being constructed in three phases. The city of Honolulu invited bids for the 6.5 mile initial segment of the project in February 2009. The first segment will be constructed from East Kapolei to Pearl Highlands and involves construction of track and guideway viaduct and surface restoration.

Ground-breaking for the project took place in February 2011. The final contract for the first segment was awarded in March 2011. The segment is expected to cost between $550m and $600m and is expected to open in 2015.

The rail transit system will later extend up to Honolulu International Airport, Waikiki, the University of Hawaii-Manoa and Kalaeloa.

The Honolulu project was conceived in 1996, but rejected several times by the city council due to the additional tax burden the project would have placed on the citizens. The project was finally approved in 2005.

The primary aim of the project is to offer high-capacity rapid transit in the congested east-west transportation corridor between Kapolei and the University of Hawaii at Manoa. The area was identified as a bottleneck for smooth flow of traffic under the Oahu regional transportation plan for 2030 (ORTP 2030). ORTP 2030 is a guide to handle the mobility issues and transportation demands of the city.

The city council conducted an environmental impact assessment study to evaluate whether an elevated rail transit system was the only option to solve the transportation problems of the city. Four options were considered in the study – a no-build alternative, a transportation management system, express buses operating in managed lanes and a fixed guideway transit system. The study concluded that a fixed guideway transit system would be the best and most cost-effective solution for serving the long-term needs of the people of the city.

The project is expected to provide a fast and reliable public transportation service, compared to buses running in congested mixed flow traffic. It will also provide secure mobility in rapidly developing areas of the corridor and in regions where small income groups and the elderly population live.

The project will also create additional transit capacity, serve as an alternative to private automobile travel and improve transit links within the corridor. Construction is expected to generate 11,000 jobs in addition to increasing the state and city’s revenues. The rail link will also help keep about 25,000 cars off the roads and highways in Oahu every day. By 2030 the project is expected to reduce traffic congestion by 11%.

"The project is estimated to cost $5.28bn and is scheduled for completion in 2019. The federal government is providing $1.2bn."

The rail transit system will be powered by electricity generated from renewable sources and supported by the Sierra Club, an environmental organisation in the US.

Guideways for the project will be 30ft high in most regions and about 50ft high, including vertical circulation, at stations. The guideways will be supported by 6ft-diameter columns about 150ft apart. Railway stations will also be elevated and equipped with elevators or escalators and will be totally ADA accessible. Railway stations will be about 270ft long and will be located at one-mile intervals.

The city plans to issue a request for proposals for the final design of the railway stations and for maintenance yard construction. Acquisition of 44 properties for the narrow right-of-way, and procurement of vehicles, traction power and train-control systems was carried out. Construction of the Waipahu transit centre was started in 2011 and work on the West Loch station began in late 2011.

Ansaldo Honolulu was awarded the core systems contract worth $574m by Honolulu Authority for Rapid Transportation (HART) in March 2011. The contractual scope includes the design, construction and delivery of 80 trains and the train control systems, along with the operation and maintenance of the rail system for 14 years after installation. The first 16 vehicles will be delivered in 2014 and the remaining ones in 2018.

In March 2011, Kiewit Infrastructure won a $372m contract from HART to construct the elevated rail guideway from Pearl City to Aloha Stadium. Kiewit is also responsible for the rail alignment, installation of train tracks and restoration of the road surface along the route.

AECOM Technology Corporation was awarded a contract worth $38.8m in January 2012 to design the airport segment of the Honolulu Rail Transit Project (HRTP). AECOM will design a 5.2-mile portion of the elevated rail guideway from Aloha Stadium to the Middle Street Transit Center in Kalihi.

The trains of the Honolulu transit system will include 200ft-long electric, steel-wheel trains with an average speed of 30mph. The trains will be able to carry 300 passengers each. Every hour the trains will transport more than 6,000 people, with the number expected to reach 90,000 a day by 2030.