Expand
Guadalajara Light Rail System currently operates two lines. Image: courtesy of Jpablo cad.
Line one is a 15.5km-long track that runs between Periferico Norte station and Periferico Sur station.
Line three of Guadalajara is scheduled to be completed in mid-2018.
Construction of line three was initiated in 2014.
A 5.3km-long tunnel will be constructed for the underground section of the line three. Image: courtesy of SITEUR. 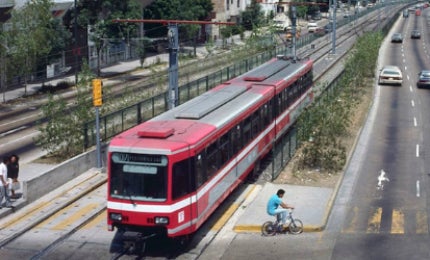 Guadalajara Light Rail System, officially known as Urban Electric Rail System, is an electric light rail system that serves the municipalities of Zapopan and Tlaquepaque, as well as the metropolitan area of Guadalajara, the capital of Jalisco and the second biggest city in Mexico.

The light rail system is owned by the state of Jalisco and operated by SITEUR (Sistema De Tren Electrico Urbano). Commissioned in 1989, the system currently has two operational lines. Line one, which runs from north to south, and line two from downtown to east. Currently under construction, line three will run between north-west and south-east. It is estimated to become operational in mid-2018.

Guadalajara LRT lines one and two

Starting operations in 1989, line one is a 15.5km-long track running between Periferico Norte station in North Beltway and Periferico Sur station in South Beltway. It includes a 6.6km underground route and 19 stations.

Line two, which became operational in 1994, is an 8.5km underground line running between downtown (Juárez) and east (Tetlán). Line one stations can accommodate 60m-long, four-car-trains, whereas Line Two stations are built for 148m-long, ten-car trains. Both lines carry almost the same number of passengers. While a trip on line one takes 30 minutes, it takes 15 minutes on line two.

Line Three is a 21.5km light rail line that will cross the full length of the city, from Zapopan in the north-west to Tlaquepaque and Tonala, in the south-east, via the city centre. It will feature a combination of underground (5.5km) and elevated (16.1km) lines, two terminals, and 16 intermediate stations, including 13 elevated (viaduct) and five underground.

A full journey on the line will take approximately 33 minutes and is expected to benefit approximately 233,000 passengers a day. The investment on the new line is estimated to be $1bn.

Construction of Line Three began in August 2014 and it is scheduled to be opened in mid-2018. The expansion is aimed at providing fast, comfortable and safe transportation to the people in the region.

Benefits of the new line on Guadalajara light rail system

The project is estimated to create 7,000 direct jobs and 15,000 indirect jobs during its implementation.

Line three will originate in the Zapopan municipality and run along the streets of Juan Gil Preciado, Avenida de los Laureles and Avila Camacho. This stretch of the tunnel will have a length of 8.2km and include seven elevated stations.

From Avila Camacho, it will cross the centre of Guadalajara, passing through the Glorieta Normal, Avenida Fray Antonio Alcalde, the Garden of San Francisco and the Avenue of the Revolution. This stretch of the tunnel will have a length of 5.5km and include five underground stations.

The line will thereafter be an elevated viaduct and will run through the Avenues of the Revolution and Francisco Silva Romero, cross over the Nodo Revolución and continue to the Guadalajara-Zapotlanejo motorway, where it will curve along Avenida de las Torres before reaching the end of Central Station Trucking. This last stretch of the line will have a length of 6.7km and include six elevated stations.

Five underground stations will be located at Normal, Alcalde, Catedral, Independencia Sur, and Plaza de la Bandera. Each station will have a 75m-long platform.

The initial fleet for the line will consist of 18 units, which will further increase with increasing demand. Each train will have a maximum length of 75m and a minimum capacity of 500 passengers. It will come in different configurations of two, three and four-cars and will run at a maximum speed of 80km/h.

Facilities on line three of the urban electric rail system

"The facilities will include lift, escalator and platform access, ventilated stations, LED-based lighting technology for underground stations and ticketing system based on contactless smart cards."

The new LRT line will be equipped with technologically-advanced facilities designed for safe, reliable and high-quality transport. The facilities will include lift, escalator and platform access, ventilated stations, LED lighting for underground stations, ticketing system based on contactless smart cards, and fire-detection and fighting equipment.

Electromechanical installations in the tunnel include tunnel ventilation, lighting and sewer system.

Telecommunications facilities will include customer care intercoms, CCTV, system-wide format screens with traffic information and operation, as well as automatic notification of train arrivals at platforms.

The contract to supply a full system of trains was awarded to Alstom and CPVM by the Secretariat of Communications and Transport of Mexico.

Alstom will supply 18 metropolis trains, a train control solution based on its Urbalis 400 communications-based train control (CBTC) platform, high-voltage and traction substations, as well as traffic control stations as part of the contract. The first train-set was delivered in January 2017.

In partnership with Transconsult, Egis is responsible to supervise the construction of track, power, signalling, telecommunications and rolling stock of line three.

Brenner Base Rail Tunnel
Topics in this article: