SBB, Regional Bern-Solothurn (RBS), and the city of Bern 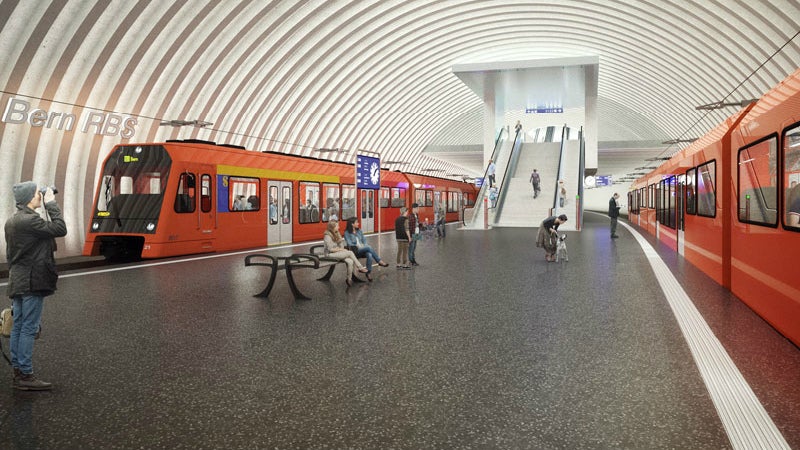 The Future Bern Station (FBS) project includes the expansion of the Bern railway station, the second biggest station in Switzerland. The project encompasses the construction of a new underground station, an underpass, and supporting outdoor expansion works.

Building permission for the Bern station expansion was approved on 26 June 2017. Construction works began in July 2017 and the station is expected to be completed by the end of 2025.

Swiss Federal Railways SBB, Regional Bern-Solothurn (RBS), and the city of Bern are the developers of the station.

The Bern station is the central hub for the city’s S-Bahn network and connects a metropolitan area with more than a million people. It was initially accessed by 16,000 passengers a day, which rose to 60,000 travellers a day and is expected to further rise to between 260,000 and 375,000 people a day by 2030.

The Bern station is being expanded in two phases. The first expansion phase will include the construction of a new underground station and a new pedestrian underpass. SBB proposes to expand the station out to the sides by 2035 in the second stage.

The new underpass will have two station entrance points at Bubenberg Centre and Länggasse. An estimated 44% of the passengers are expected to use the underpass, which will allow them to reach the SBB and RBS stations quickly and without having to take any detours.

Construction of the new pedestrian underpass is expected to shorten the transfer routes between the platforms. The underpass will also have a range of retail outlets.

The new RBS station will have four 190m-long tracks, which will be built underneath tracks two to seven of the existing SBB station. It will comprise two large underground halls, each with two tracks and a 12m-wide central platform.

The platform of the new RBS station will be located approximately 17m below the SBB passage. The height of the platforms will be increased to make it easier for passengers to enter and exit trains.

Passengers can use escalators and lifts from platform level to either reach the platforms for the main line long-distance and S-Bahn services or exit into the city.

The south wall of the platform hall towards the Burgerspital building will be opened to create a brighter and friendlier atmosphere.

The federal government via infrastructure funds, the city of Bern, and Canton will provide most of the financing.

"The construction works at Laupenstrasse will include a platform for load-wagon transports, as well as a building on the side of the track field."

Three installation spaces at Deer Park, Eilgutareal, and Laupenstrasse have been identified for construction. A 1km-long connecting tunnel will be built from the Deer Park to the new station. In addition, an emergency exit will be built in the Deer Park.

New underground parking for SBB and RBS will be constructed at Eilgut, along with an emergency exit and underground spaces for railway systems and subsystems.

The construction works at Laupenstrasse will include a platform for load-wagon transports, as well as a building on the side of the track field.

The supporting projects will include the restoration of the Perron ceiling, new signal boxes, and other track works. The Swiss Federal Railways, the Post, and the Grosse Schanze are expected to clear the expansion joints over the SBB Perron area by the end of 2018.

Construction of the SBB underpass will start in November 2017 and is expected to be completed by 2025.

Basler and Hoffman was awarded the contract for providing engineering and support services for the shell construction.

Companies involved
Nencki
Nencki is a leading Swiss manufacturer of bogie testing and...