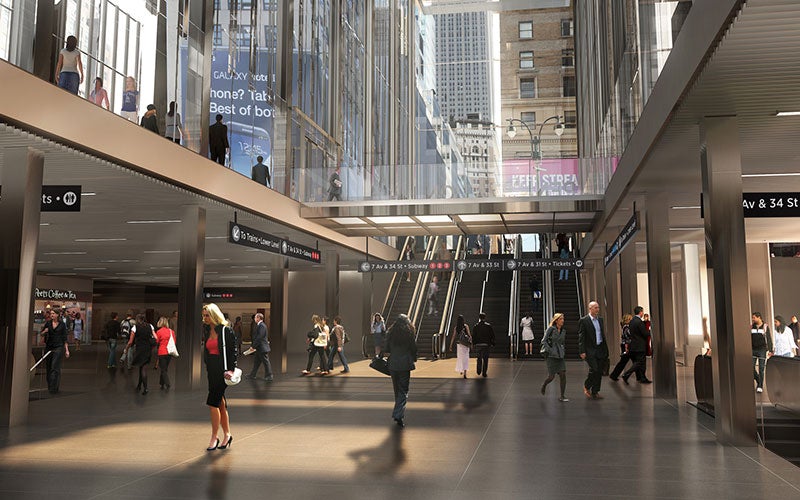 The Empire Station Complex Project includes the renovation of Penn station and the historic James A Farley post office into a state-of-the-art transportation hub.

The project was announced on 6 January 2016 by New York’s governor, with a groundbreaking ceremony expected to take place later in the year.

The Penn station was built in 1910 by Pennsylvania Railroad, and is currently the main intercity railroad station in New York City.

It is located beneath Madison Square garden between 7th and 8th Avenue. The original station was demolished and reconstructed in 1969, and was relocated underground with tracks and platforms remaining untouched.

In 1990, Amtrak and New Jersey Transit renovated the station to enhance the waiting and concession areas, as well as the information systems.

33rd Street will be closed, and skylights will provide light to the concourse. New entrances will be constructed at the corners and mid-block, as well as at 7th Avenue.

Located near 8th avenue, the Farley post office will be converted into a 210,000ft² train hall.

The new hall will be connected to Penn station through an underground pedestrian concourse, and will serve passengers of the Long Island rail road, New Jersey transit, and the new air train to LaGuardia airport.

The facility will feature an energy-efficient architectural design and modern amenities such as concourses, shops, Wi-Fi and digital ticketing. It will also reduce congestion with 30 new escalators, elevators and stairs for spacious circulation.

Underground concourses will be constructed to connect the Farley post office to Penn station.

The redevelopment work on the Farley building has already begun. The lower concourse and the underground subway connections are scheduled to be completed in 2016.

Work on a new passenger concourse, located west of 8th avenue, is scheduled to be completed by fall 2016.

The Penn station and Farley post office renovations are planned to begin after preliminary work is completed.

The project will receive approximately $325m from government sources, including the US Department of Transportation (USDOT), Port Authority and Amtrak.

The remaining funds will be provided by private investments in exchange for an interest in long-term returns generated by the retail and commercial rents.