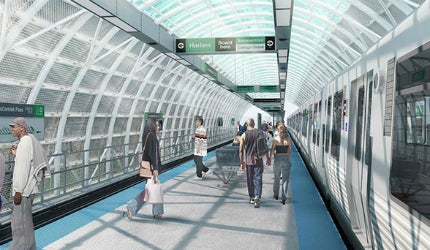 The Cermak-McCormick Place station on the Green Line of Chicago ‘L’ rapid transit system was officially opened in February 2015. The new station, operated by the Chicago Transit Authority (CTA), serves the growing area near historic Motor Row and provides access to the rapid transit system for neighbourhood residents and businesses.

It is the 146th CTA station and has bridged the gap in CTA service at Cermak, which has been without a station since 1977. The very first station at the location, the old Cermak station, was opened in 1892, but demolished in 1978.

The project was announced in 2012 and broke ground in 2013. Construction was managed by Chicago Department of Transportation. The new station offers a convenient travel option for passengers whilst also supporting economic development in the community.

Location of the Cermak-McCormick Station

Greater Chicago is the third largest of the US metropolitan statistical areas, extending into the states of Illinois, Indiana and Wisconsin.

The station is located to the west of the McCormick Place Convention Center, close to the intersection of Cermak Avenue and State Street. It lies in the two-mile section between Roosevelt and 35th-Bronzeville-IIT stations on the Green Line.

The design of Cermak station features a tube-shaped canopy covering the platforms and tracks, and is CTA’s only fully-enclosed outdoor ‘L’ station. Its canopy offers coverage for six cars, whereas the centre- island platform is configured for an eight-car train.

"The very first station at the location, the old Cermak station, was opened in 1892, but demolished in 1978."

The station features three entrances including a main entrance on the north side and two on the south side of Cermak and 23rd street. The main and 23rd street entrances are equipped with elevators from the street level to the platform to provide easy access for passengers.

The station adheres to ADA-accessibility guidelines and features facilities for disabled passengers at street level. It also features modern facilities including bike racks, wheel-chair accessibility, new bright lighting, signage with digital displays, and a fully-enclosed boarding platform that protects riders from the elements.

"The canopy, made of perforated stainless steel, polycarbonate material and glass, allows natural light to stream onto the platform during day time."

The station also features sidewalks, landscaping, and street lights along 23rd Street. Convenient bus connections to a number of CTA routes run regularly from the station.

The total investment for the project was $50m, which was funded as a part of $92m overall transportation improvement project to revitalise the south side of Chicago. The investment came from the community improvement scheme funded by tax increment financing (TIF) funds.

The station design was provided by Chicago-based Ross Barney Architects, while F.H. Paschen, S.N. Nielsen was the general contractor for the project.

London’s Waterloo station is one of the busiest railway stations in the UK, handling more than half a million passenger…

06 Jan 2021
Registration is disabled.
We use cookies to ensure that we give you the best experience on our website. If you continue to use this site we will assume that you are happy with it.ContinuePrivacy policy