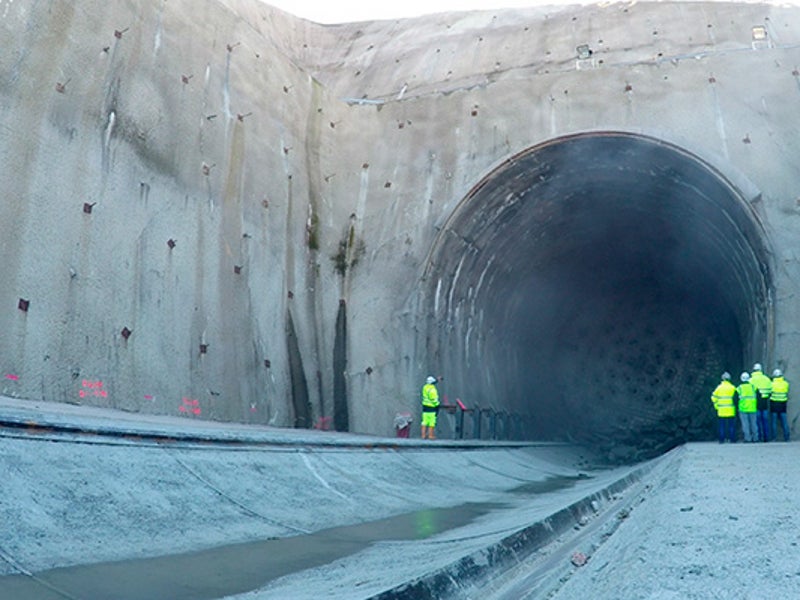 The Bolaños twin-tube rail tunnel is being built on the Madrid-Galicia high-speed line in Spain. The 6.7km-long tunnel is located in the municipality of Castrelo Do Val, approximately 70km away from Orense.

Boring on the tunnel was completed in December 2016. The project is estimated to cost approximately €162m ($182m).

The 9.9m-diameter twin-tube Bolaños rail tunnel forms part of a 7.9km-long section of the Madrid-Galicia high-speed rail line. The section also includes a viaduct over the Val de Parada River. The useful cross-section area of the tunnel is 60.27m². The maximum overburden is approximately 200m with a water load of 140m.

The tunnel includes two twin viaducts of 41m each, two flyovers and six longitudinal drainage trenches and a free section of 5m² under the platform. The twin tubes are linked by 18 communication galleries.

An R&D + i solution involving the application of a stabilisation system in zones of high-geological instability was applied in the construction of the tunnel. The double-component backfill method was implemented to fill the annular gap. Materials such as bentonite, cement and water, as well as a silicate additive were used for backfilling.

High-quality finish was achieved by gelatinous consistency that bonds the mix within seconds of injection.

Rock bolts were used in the tunnel to bind drilling, grouting and anchoring together. The bolts offer full slurry bonding to circumferential rocks to prevent distortion and collapse. The placement of the double joint between segments further provides the tunnel a greater compactness.

Approximately 35km of power lines, an on-site water treatment plant and associated infrastructure facilities were also built as part of the project.

A Herrenknecht S-511 single-shield TBM was used to bore the twin tunnel segments across a variety of terrains containing shales, quartzite, phyllite and sandstones. The tunnel was lined using precast segments with an average thickness of 370mm and a length of 1.6m.

The TBM integrates a rotating cutter-head equipped with disc cutters. Each disk applied a force of up to 32t on the face of tunnel, while the buckets installed at the cutter-head collected the excavated material.

A joint venture comprising FCC Construcción, Contratas y Ventas, and Construcciones y Obras Llorente was awarded a €97.8m ($120.4m) contract to build the Vilariño-Camobecerros section of the Madrid-Galicia high-speed railway in August 2012. The scope of the contract also covered the construction of the Bolaños tunnel.

Herrenknecht was awarded a contract to mobilise its single-shield TBM to bore the twin-tube tunnel.