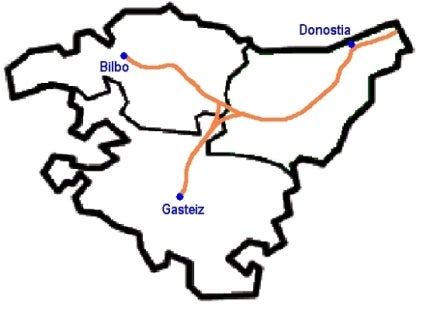 Basque Y (also known as Y Vasca) is a 172km-long high speed network currently under construction in Spain. Basque Y will connect the three capitals in the Basque Autonomous Region, Bilbao, Vitoria and San Sebastián, and will transport both goods and passengers.

The new rail network is one of the 14 infrastructure projects designated as priority by the European Union at the Essen Summit in December 1999 and will help the Basque Country to form a new railway link with Europe.

Construction on Basque Y was launched in October 2006 and is expected to be completed by 2017. ADIF, the Spanish state-owned company, is responsible for the construction.

"Construction on Basque Y was launched in October 2006 and is expected to be completed by 2017."

The proposal to develop a high-speed railway network in the Basque Country dates back to 1987 when the Spanish Railway Transport Authority built a new railway access to Andalusia. An investigation into the existing railway infrastructure revealed the necessity to upgrade the network to high-speed links.

The first step towards the project was the inauguration of a high speed railway link between Madrid and Seville in April 1992. A list of strategic projects for the continent was created, which included a high-speed network for the Basque Country.

Environmental Impact Assessment was conducted on the project in early 2000. Proposals were sent to the EU High Commissioner of Transport in November 2005 for their support for construction and infrastructure management of the project.

Ministry of Public works and Basque Department of Transport signed an agreement for the construction of Basque Y. Construction work followed with the launch of works on the Arrazua/Ubarrundia-Legutiano stretch. The latest technologies and innovative construction methods are being used in the construction.

The project features two lines, Vitoria – Bilbao and Bergara – San Sebastián – Irun, which connect the cities of Bilbao, Donostia-San Sebastian, Irun, Astigarraga and Vitoria-Gasteiz. The lines are subdivided for construction based on the three provinces Bizkaia, Álava and Gipuzkoa that make up the Basque country.

Infrastructure and rolling stock for the Basque Y

The rolling stock for the Basque Y is being designed with advanced technology, while minimising the negative impact on the environment.

The Y network will greatly reduce travel times between the capital cities. Statistics reveal that approximately 47,000 trips occur daily between the three metropolitan cities, with the Y network providing a great advantage and considerably easing the traffic.

"Basque Y will connect the three capitals in the Basque Autonomous Region."

The new network will also provide links to important logistic areas of the country, such as Port of Bilbao, Port of Pasaia, and Jundiz. It will also help to connect to Spanish and European high-speed networks.

The project will also provide low energy transport and comfortable, quick and straight access to the capital cities in Basque provinces. The line, when finished, will ease congestion due to road traffic, reduce probability of accidents and help in territorial integration.

Financing for the Basque Y project

The project is being financed completely by Railway Infrastructure Authority of Spain. It faced long delays because of oppositions in funding during critical economic conditions. Ministry of Public Works and the Department of Transport finally signed the agreement for financing €4.1bn ($5.1bn) for the project, in April 2006.