The Baku-Tbilisi-Kars (BTK) railway line is a regional railway link that will directly connect Baku in Turkey, Tbilisi in Georgia and Kars in Azerbaijan.
Tbilisi is one of the cities served by the BTK railway.
At Akhalkalaki station, a special area would be constructed for trains to convert from one gauge to another (1,520mm to 1,435mm). 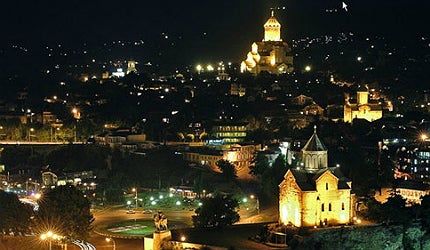 Baku-Tbilisi-Kars (BTK) railway line is a regional railway link that will directly connect Kars in Turkey, Tbilisi in Georgia and Baku in Azerbaijan. The total estimated cost of the project is $600m ($422m excluding infrastructure costs).

The key objective of the project is to improve trade and economic relations between the three regions, as well as gaining foreign direct investment by connecting Europe and Asia. The project will facilitate transportation of passengers and goods, principally oil.

The project was originally scheduled for completion in 2010 but has been delayed. As of October 2012, nearly 92% of the work on the railway line in Turkey has been completed.

The presidents of Azerbaijan, Georgia and Turkey signed the declaration on the Baku-Tbilisi-Kars railway connection on 25 May 2005. The key reason for the agreement was the rejection of assistance by the EU and the US as this link was bypassing Armenia.

"The key objective of the project is to improve trade and economic relations between the three regions."

The project has proved somewhat controversial. In August 2008, Ara Papyan, the former Armenian Ambassador to Canada, stated in a seminar that the Baku-Tbilisi-Kars railway line was illegal under international law. In addition, he stated that the Baku-Tbilisi-Ceyhan pipeline passes through historic Armenian territory which was not legal. Finally, Ara Papyan opined that both these projects were illegal and subject to Armenia’s right to demand transit fees for traversing in its territories occupied by Turkey.

To construct the 29km line of the BTK link, an ST-2 wheelbase in the border of Turkey and Georgia, and modernising old railway, Georgia availed a loan of $200m for 25 years at one percent interest annually from Azerbaijan. Turkey and Azerbaijan would fund their own routes. The Turkish segment of the railway line extends to 76km.

In September 2007, offers from 14 companies were received for the BTK railway tender for the construction of the Turkish segment of the railway line. The winning offer to the tender was 289.8m TL from Ozgun Construction-Celikler Consortium, while the highest offer was 693.4m TL from the Nurol-Tekfen consortium. The Ozgun Construction-Celikler consortium won the tender to construct the project in December 2007.

Azerinsaatservis, a leading motorway and rail road constructor won the tender to construct the Georgian part of the railway line in October 2007.

Route through Azerbaijan, Georgia and Turkey

Turkey uses standard gauge and Georgia uses broad gauge track. For this project, at Akhalkalaki station, a special area would be constructed for trains to convert from one gauge to another (1,520mm to 1,435mm).

A total of 105km of railway line, including railway line segments in Turkey and Georgia, would be constructed as part of the project.

The Georgian part is funded by the Georgian Ministry of Economic Development, with a budget of $79.44m.

In addition, the 160km section of Akhalkalaki-Tbilisi railway line would be modernised, improving its carrying capacity to 15 million tonnes of cargo per annum. Azerbaijan has provided a soft loan of $775m to Georgia for construction of the line.

Future for the international railway project

It is hoped that the railway line will improve the trade and economic relations between Central Asia, Azerbaijan, Georgia and Iran, when connecting with Europe.

"The railway line will be laid along a route that connects Baku in Azerbaijan, Tbilisi in Georgia and Kars in Turkey."

Experts forecast that the BTK railway line will transport a million passengers and 6.5 million tons of cargo in its initial stage.

By 2030, this railway line would carry an estimated 17 million tons of cargo and about three million passengers.

The republic of Azerbaijan estimates that the BTK line will bring in $50m a year, becoming a key segment of the transportation corridor.

Parallel to this, the completion of the Marmaray project under the Istanbul strait will allow shipping of goods and passengers from Europe to China.

China has already expressed interest in shipping consignments through this route.

Turkish Railways (TCDD) is constructing the country’s first high-speed railway line, which will connect the capital city of Ankara with largest population centre of Istanbul, and serve more than 17 million people.

Tbilisi is the capital city of the Republic of Georgia. The country is currently undergoing post-war reconstruction and the Tbilisi Railway Bypass Project is one of the several infrastructure projects being undertaken.