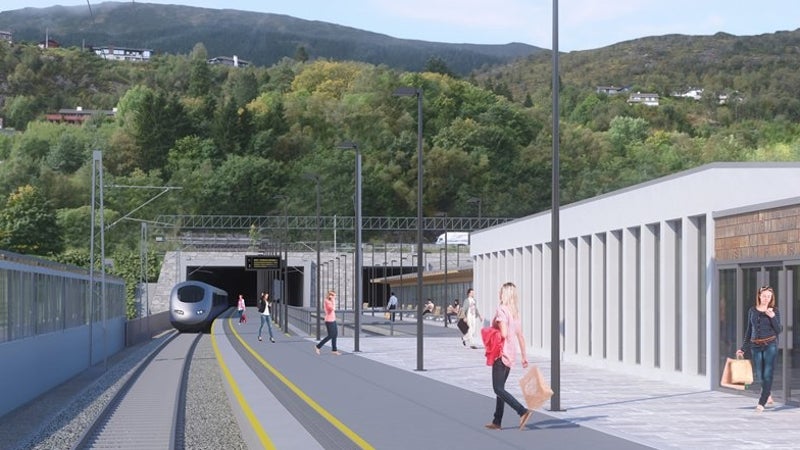 The single-track Arna-Bergen railway line in Norway is being converted into a double-track route to facilitate increased speed and more flexible traffic evolution.

The project also includes the construction of a new 7.8km underground tunnel at Ulriken and various upgrade works at Arna Station.

Construction on the project began in 2014 and the double-track route will commence services from 2022.

The tunnel drilling works began at Arna in January 2016, while breakthrough was achieved at Fløen on 29 August 2017.

The project is being developed by Norwegian state-owned company Bane NOR, which is responsible for providing national railway infrastructure in the country.

The Arna to Bergen line double-tracking initiative will be divided into two segments for construction purposes, with the project works being split between the Arna to Fløen and Bergen to Fløen routes.

The Arna to Fløen segment involves the construction of a new parallel tunnel between Arna and Fløen (Ulriken), as well as modernisation of the older tunnel, upgrades to Arna station and other technical improvements.

Major works on the Arna-Fløen line include the construction of a new 11km overhead contact line system, a new lighting and interlocking system, and upgrades to the earthing installation.

The project will also see the provision of an interface with the Arna converter station in order to draw power to the overhead contact line.

The Fløen to Bergen segment involves the construction of a 1.3km-long double track, installation of a new Class B interlocking system at Bergen and other technical improvements.

Other works along this segment comprise upgrades to the track substructure, including drainage systems, cable conduits and ballast installations.

The 1,800t TBM used at Ulrikke was built by German company Herrenknecht in Schwanau. The boring head of the 155m-long machine measures 9.33m and features an engine with a power output of approximately 5,250kW.

The first 765m of the 7.8km-long tunnel was bored using traditional methods to achieve a transit loop at the eastern end of Arna station, while the remaining portion was drilled using the TBM.

In addition, two diagonal tunnels approximately 150m in length were blown between the old and new tunnels, allowing trains to cross between the tunnels.

A further 16 smaller interconnections are scheduled to be blown between the tunnels as escape routes, as well as for use during technical installations.

The first phase of development on the tunnel and diagonal tunnels was conducted between November 2014 and October 2015.

Arna Station will be upgraded to accommodate the double tracks running to Bergen through the new Ulriken tunnel.

Refurbishment works at Arna Station were started in January 2017 and are expected to be completed by 2021.

Ramps and stairs will be constructed on the south side of the station as part of the project, along with other track improvements.

A new technical building and technical railway systems will also be constructed under the development programme.

“The first 765m of the 7.8km-long tunnel was bored using traditional methods to achieve a transit loop at the eastern end of Arna station.”

Additionally, the underpass below the tracks will be renovated and widened as part of the station upgrade.

A new temporary platform was opened at the station on 20 March 2017.

The Norwegian Rail Administration (NSB) awarded a Nkr1.3bn (approximately $194m) contract for the construction of the Ulriken tunnel to the Skanska and Strabag joint venture (JV) in May 2014.

Norconsult was engaged to provide a complete retail plan and construction plan design for the new Ulriken tunnel.

COWI was contracted to provide the signalling system on the Bergen-Fløen route.

NSB awarded a Nkr97m (approximately $12m) contract to NJD to carry out preparatory works along the Bergen-Fløen line.