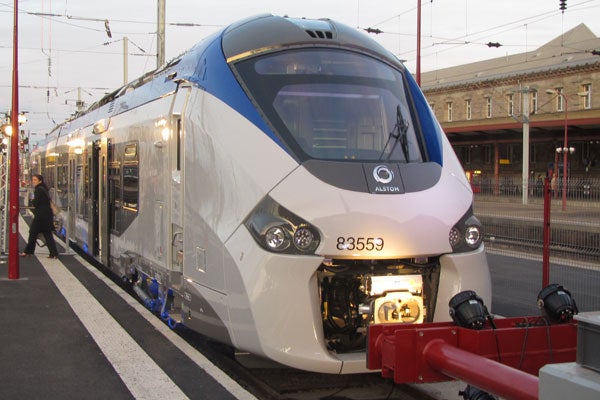 Régiolis is a next-generation regional train developed by Alstom Transport. The train is derived from Coradia Polyvalent regional trains. The new trains aim to offer reliability and comfort for passengers, while delivering low operational costs.

"The new trains aim to offer reliability and comfort for passengers, while delivering low operational costs."

The fleet of Régiolis trains has run for 350,000km to conclude dynamic test phase. The Commercial Operation Authorisation (AMEC) from French Rail Safety Public Authority (EPSF) was received in March 2014 allowing the trains to enter into service in April 2014.

The bogies are placed at the ends of the train to minimise the vibration and noise experienced by passengers. The equipment is installed on the roof to create additional internal space for the passengers and luggage. The acoustic comfort inside the trains is enhanced by removing most technical units and other sources of vibration.

The Régiolis range of trains is available in three lengths. The 110m-long train includes six cars, while 72m and 56m-long trains include four and three cars respectively. Régiolis trains are offered in three types of configurations, suburban, regional and intercity. These configurations are designed to fulfil the specific requirements adapted to the types of routes served.

The technical equipment on the roof and other key equipment aboard the Régiolis train sets are easily accessible enabling optimised maintenance. The state-of-the-art technologies used in the trains offer advantages in terms of safety, comfort and space.

The modular architecture of Régiolis allows the integration of train interiors according to the interest of each region. The railcars feature seating, multi-activity areas such as bike racks and ski racks, passenger services, work areas and recreational spaces for families.

Régiolis is the first regional low-floor train in France. The low-floor cars allow easy movement and access for passengers onboard. The internal space is designed to offer complete visibility from one end of the train to the other.

The information system screens installed in the railcars display traffic conditions in real time. The systems can be optionally equipped to provide information on the weather and local tourist attractions. This information will be announced through an audio track for visually impaired passengers.

Régiolis regional trains offer a range of devices to enhance safety and security. Trains can be equipped with video surveillance and decision support systems for assisting drivers and control centres. The intercom system installed in bogies allows passengers to contact the driver in case of emergency.

Régiolis trains are powered by bimodal (diesel/electric) or electric engines. The permanent magnet synchronous motors offer superior power-to-weight ratio. The four-car train develops a unique special power of 1kW/kg, or 20% more power than that of the last generation. The new generation of engines can also recover the energy produced during braking.

The energy consumption is further reduced due to the low weight of the trains. The redundancy of the propulsion ensures the availability of trains for a maximum period of time.