Expand
The Al Mashaaer Al Mugaddassah Metro Line project connects the holy cities of Mecca, Arafat, Muzdalifa and Mina.
The monorail project consists of five-car train sets with separate areas for men and women.
The Mecca metro project includes several phases of construction.
The first phase of the project included the four-line loop with a network of pick-up and drop-off stations between Mina and Arafat.
The five-car sets for the monorail were supplied by UK firm MonoMetro.
The Mecca project is aimed at easing congestion in times of pilgrimage as well as providing extra transport for Saudi residents.
The vector bifurcation bogie is articulated at the vertex between either side with steel wheels running on steel rails. 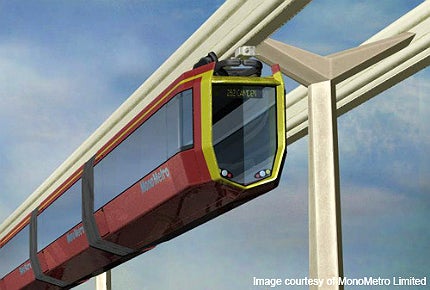 The Al Mashaaer Al Mugaddassah Metro Line (MMMP), which is part of the Makkah (Mecca) Metro, is an 18.1km line constructed to connect the holy cities of Mecca, Arafat, Muzdalifa and Mina. The line was opened in November 2010 and became fully operational in November 2011.

The Mecca monorail project has been one of many undertaken by Saudi Arabia to expand its railway network to meet the transportation needs of its growing population of 25 million and improve an antiquated logistics infrastructure.

The line provides transport for about 3.5 million people who arrive at Mecca annually to perform Hajj. The number is expected to increase to five million in future.

"The Makkah monorail project has been one of many undertaken by Saudi Arabia to expand its railway network."

Construction of the monorail project has helped to solve the problem of heavy traffic congestion in the holy cities during the Hajj period and meet the transportation needs of the local people . Masterplans drawn up by MonoMetro show that five monorails need to be constructed to handle the flow of pilgrims to the holy cities.

The first phase of the project included the four-line loop with a network of pick-up and drop-off stations between Mina and Arafat. The first of the five new metro lines started operating with Automatic Train Protection at 35% capacity by November 2010.

The metro could carry 72,000 passengers in each direction per hour by 2011’s Hajj. About 8,000 skilled and unskilled workers, along with 5,000 engineers, were engaged in the project.

The line services Mina, Arafat and Muzdafila, each of which have three substations each. The four-line parallel loop network splits into single tracks covering all the encampment zones in Mina. Mina is the last station on the metro line and is located towards the west of the Jamarat Bridge. The metro line is linked to all the four floors of the bridge with elevators.

The four-line parallel route moves south towards Arafat before reaching a main station next to the Arafat Mosque and splitting again into a single-line network to carry pilgrims into Arafat. The lines come together again and move towards Muzdelefa, where pilgrims can spend ceremonial time before returning to Mina.

The line runs on a viaduct with the depot located at the end of the trail that is behind the first station in Arafat.

The trains of the monorail can operate at an elevation ranging from 8m to 10m so that they do not obstruct the movement of vehicles and pedestrians on the ground.

"The metro reached full capacity to carry 72,000 passengers in each direction per hour by 2011’s Hajj."

The trains comprise 12 carriages, each 20m long and 3m wide. The monorail runs on a powerful superstructure made of steel railroads supported by solid concrete pillars made of prefabricated steel masts and beams.

The design of the superstructure is auto-responsive to the forces of acceleration and emergency braking, with columns and specialised beamways that act as a kinetic energy absorbing/redistribution network, as well as the modular elevated station kit.

Controlled access to the monorail prevents accidents such as the tragedy at Mina in 2006, when more than 350 people died in a stampede. Trains on four elevated tracks transport 20,000 pilgrims per hour in an orderly manner. The project also included the construction of multi-storey parking facilities at the entrance of Mecca to help pilgrims park their cars before boarding the trains.

The rolling stock for the monorail includes five-car sets running together as ten-car sets supplied by MonoMetro, UK. Each five-car set is entirely interconnected and air-conditioned with separate areas for men and women.

Each five-car set has a central emergency escape car with inflatable chutes to enable pilgrims to escape in case of an emergency. As the tracks form a closed loop each train set circulates several times between Mina and Arafat. The rolling stock is stabled throughout the year for cleaning and maintenance at the depot in Arafat.

The technology on which the monorail is based is steel wheels running on steel rails in a vector bifurcation bogie capture configuration. The wheel-rail interface geometry for the monorail was developed by MonoMetro with SKF, the Swedish bearings manufacturer. ESG, the mechanical engineering arm of English Welsh and Scottish Railways, developed the vector bifurcation bogie sets.

Knorr-Bremse was awarded a $55m contract to provide braking systems for trains and station platform screen doors for nine stations of the metro line. The contract to supply 17 Type-A 12-car metro train sets was awarded to Changchun Railway Vehicles in April 2009.

CRCC awarded a $144m contract to Thales in June 2009 to supply, integrate and deploy its driverless train control and telecommunication systems for the project. Thales designed, integrated, installed, tested and commissioned the systems. It also installed the SelTrac Communications-Based Train Control (CBTC) system in the metro project.

"Each five-car set is entirely interconnected and air-conditioned with separate areas for men and women."

A contract worth $1.8bn for the project was awarded by the Saudi Arabian government in February 2009 to a consortium of companies led by China Railway Construction (CRCC). CRCC carried out construction of the infrastructure and integration of various systems.

Westinghouse Platform Screen Doors provided the PSDs for the project, Siemens supplied power and Lloyds Register acted as the safety assessor. Systra carried out the civil work and WS Atkins was in charge of electrical and mechanical systems, and project management.

Brecknell Willis, a UK supplier of power rails and current collection shoes for railways, provided a lightweight aluminium power rail with stainless steel contact surface. It also supplied 1,500v DC and a current draw of 3,000A.

UK firm Intelligent Engineering provided patented elastomeric bonding technology for the butterfly masts, side arms and the consecutive beam junction assembly with viscous damping. The technology enables cyclical expansion and contraction to sustain heat in the region. It also provides high resistance to emergency braking force. Buro Happold was responsible for developing the structural engineering of the MonoMetro superstructure.

Expansion of the Mecca (Mekkah) metro

The Mecca Mass Rail Transit Project (MMRT) project will include the construction of four new metro lines A, B, C and D complementing the Al Mashaaer Al Mugaddassah metro line. The new lines will have a total length of 180km and will cover about 88 stations.

The SR62bn ($16.53bn) MMRT project will be implemented in three phases for over the next 10 years. Phase 1 will include the construction of lines B and C by 2017, while lines A and D will be constructed in future phases.

The project will be managed by the Makkah Mass Rail Transit Company (MMRTC) and is entrusted by the Development Commission of Makkah and Mashaer (DCOMM).

Parsons Brinckerhoff will serve as a programme management office consultant for the MPTP programme.

The proposed 534km Mumbai-Ahmedabad high-speed link, which is in early stage of development, will be India’s maiden high-speed rail project.