The contracts together are valued at $1.7m (NGN718.19m) and will be effective for a period of two years. 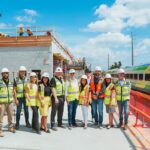 Under this, Messrs Segad Security Protective Company will deliver security services on 18km of rail track, including four stations.

The contracts require the companies to offer services including protection of rail tracks, communication and control centre infrastructure, and electrical and signalling equipment.

Transportation Secretariat acting secretary Usman Musa Yahaya said that the contracts for security services were necessitated following ‘vandalisation’ of portions of the track and rail facilities.

According to the Minister, the Abuja Rail Mass Transit operation was commissioned in June 2018.

The rail services on the stretch were hit due to the nationwide lockdown owing to the Covid-19 pandemic.

“This approval is therefore a very good one for the FCT because it will go a long way in securing the rail track,” added Yahaya.