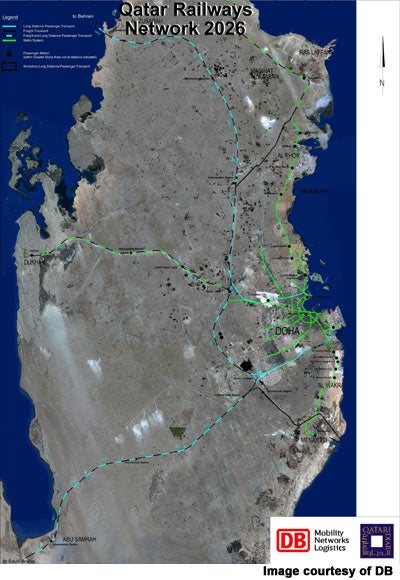 The Qatar Railways Development (QRC), which is implementing a $37bn integrated rail system in the country, is set to award six major contracts in April 2012.

The contracts include four tunnelling packages with each worth $2bn to $3bn and two major station projects in Msheireb and Education City, which will each cost $1bn.

Qatar Rail deputy chief CEO Geoff Mee was quoted by constructionweekonline.com at the Qatar Projects 2012 conference saying that the country’s bid for the 2020 Olympic Games had accelerated plans to have enough of the Metro operational in time, should the bid be successful.

"We have to plan for winning the Olympics because if we wait until the announcement, we will be too late in order to build it in time," Mee said.

As the country is gearing up to bid for the Olympics it is planning to complete the Doha Metro project 18 months earlier than originally planned.

It has also changed the phasing of the project, with Phase 1A of the Metro rail project planned to be implemented to cater for the Olympics, while Phase 1B will include the additional work needed for the World Cup. Phase 2 will cover the completion of the entire project.

Qatar Rail will call about 30 consortia who have prequalified for the contracts to make presentations next month which will allow it to get clarity on the projects and reduce the number of bidders.

Phase 1A entails the four tunnelling packages, including the Msheireb and Education City stations, will connect the New Doha International Airport to the Lusail urban development area and are expected to be completed by 2019. Phase 1B, the second phase, will extend the metro to Al Wakrah and Al Khor, connecting all the stadiums for the 2022 FIFA World Cup.

The first phase will build a 52km single-bore tunnel while the second phase will have a combination of tunnelling for a few km with the rest being an elevated line. Doha Metro will be one of the most modern railway networks in the world and will have four lines with an overall length of 300km, connecting 98 stations.

Caption: The master plan involves development of the metro railway system in Qatar with long-distance and freight lines connecting the emirate with rest of the Gulf Cooperation Council. Image courtesy of DB.