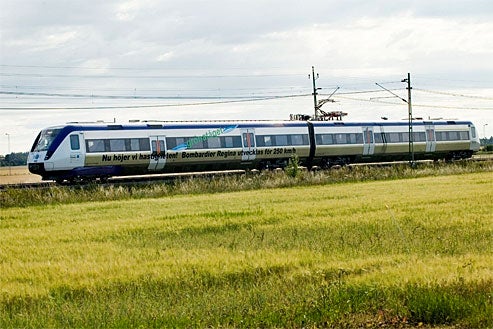 A group of Swedish researchers, supported by Bombardier, have found that new-generation trains with higher speeds, lower energy consumption, reduced noise and lower costs can run on the existing track network.

Gröna Tåget is a fast electric tilting train, based on the Bombardier Regina vehicle that can run at a higher speed than conventional trains on sections with curves. The 300km/h train is equipped with components of the new Bombardier ECO4 technologies that maximise total train performance and energy-efficient operation, the company claimed.

The project was conducted in close cooperation between the Swedish Transport Administration, Bombardier, the Royal Institute of Technology in Stockholm and several other partners. The report noted that the concept train had set a Swedish speed record of 303km/h, but stated the development programme was not a finished train model.

Bombardier said the concept offers operators and infrastructure managers flexible train length, reliability and accessibility in the harsh climatic conditions in Nordic countries. The trains can be designed with greater width than existing trains, allowing more passenger space and aerodynamic design, while more efficient motors enable the train to reduce power consumption by 30-35%.

The Gröna Tåget technology has been tested in trial runs over 500,000km of track in all weather conditions over the past six years.

Caption: Gröna Tåget is a high-speed electric tilting train, based on the Bombardier Regina vehicle, which can run at 300 km/h. Credit: Bombardier.