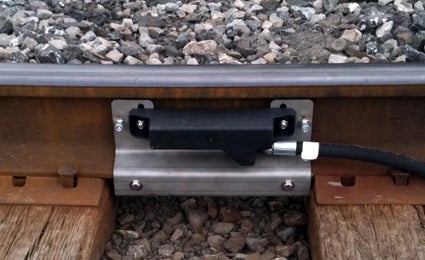 The Argenia Solar+Wireless digital wheel sensor is a state-of-the-art, microprocessor-controlled, digitising wheel sensor for urban rail, mainline and train yard applications. It is the only wheel sensor on the market with solar and wireless capabilities.

Using dual sensors, Argenia’s system can detect train speeds of up to 320km/h within 0.2%, and its unique majority logic configurations minimise miscounts.

The company’s wheel sensors do not interfere with track circuits or other vital systems, and Argenia provides a virtual train simulation mode for easy self-test and diagnostics, enabling safe train detection with any ballast condition.

Argenia’s wheel sensors are low-power and are ideal for solar-powered operation.

Sensors and electronics are protected from electromagnetic compatibility (EMC), electromagnetic interference (EMI), lightning, UV and shock, according to the American Railway Engineering and Maintenance-of-Way Association (AREMA).

Sensitive electronics are mounted on the wayside away from the vibrations on the track. Planar printed circuit board (PCB) magnetic design of the sensor coils enables a lightweight, lower profile sensor without a fragile ferrite core.

Wheel sensors can be paired to provide speed detection to 0.2% accuracy up to 320km/h. Sensors can be mounted to detect all wheel flange sizes. Using a customised algorithm, axle counting corrects for miscounts from truck-mounted motors and brakes.

Argenia’s patent-pending majority logic correction corrects for one wheel miscount in a block. The company has a configurable detection threshold to adjust sensitivity.

The company can adjust pulse discrimination to reject extraneous pulses and adjust filter response to improve noise margins. Sensor separation is entered into the system to ensure high-accuracy with speed measurement, and sensor addresses are set to a 32-bit address using dip switches.

Detecting the occupancy of track blocks is one of the primary applications of wheel sensors. Sensors are fastened to the rail at the check-in and check-out points at either end of a section of track creating a ‘block’.

The wheel counter unit (WCU) collects waveforms from the sensors and sends digital data to the system controller (SYS) for processing. The SYS counts the axles of the train as it enters the block, and again as it leaves, based on the output of the sensors. The SYS will indicate that the block is ‘occupied’ when the first axle passes the check-in point.

Once the SYS has counted the same number of axles leaving the check-out point as it counted at the check-in, the block is deemed vacant and safe for another train to enter.

Wheel sensors are used at the ‘farpoints’ of the approaches (typically 4,000ft from the crossing), ‘nearpoints’ (approximately 2,000ft away), and at the ‘island circuit’ of the crossing (roughly 200ft on each side of the road). Additional wheel detection points may be used to monitor switches or multiple track systems where required.

Two wheel sensors are placed 6ft apart at each detection point to compensate for variations in the depth and position of the wheel flange. This creates space and time diversity, which mitigates wheel hunting, electrical noise, and vibrations to ensure both wheels of the axle are counted.

As wheels are counted by the two separated sensors, the speed is measured highly accurately. Train position is calculated based on the speed-time integration, allowing the calculation of the progression into the crossing zone. This provides a constant warning time of 25s for any train speed.

Crossings are available in multiple configurations for varying conditions, budgets and timelines.

Freight cars can spend up to two thirds of their transit time sitting idle in yards. Yard management optimisation systems significantly increase throughput, which increases the profitability of a route.

Wheel sensors are ideal for tracking the movement of rolling stock in yards. They are fastened to the rail at the entry points of each track segment where they detect cars as the come in. Data from the sensors is sent to yard automation systems that assist with the sorting of stock.

Argenia has been developing control systems for the rail industry for more than ten years.

The company’s founder developed the first railway wheel sensors in North America and sold the patent to L B Foster. Its next-generation wheel sensors and axle counting systems are the most sophisticated and configurable on the market.

Argenia is based in Toronto, Canada, and serves companies worldwide.