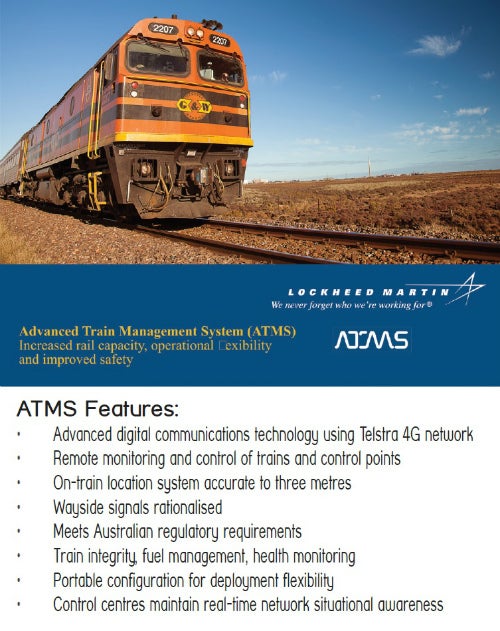 The programme’s aim is to minimise trackside signalling infrastructure and increase available capacity on the existing network, whilst improving the reliability, flexibility and safety of train operations.

ATMS is a train management system designed to communicate via both voice and Telstra’s NextG data networks between Network Control Centres and locomotives operating on ARTC’s national network.

Central to the system is the Lockheed Martin Authority Management Server Safe Computer. It interfaces with the Network Controller, receives Authority Requests from the Train Controller, validates the requests and controls Trackside Interface Units and the Train Control and Display equipment on-board the locomotives to issue the Authorities.

Lockheed Martin had a number of stringent user requirements to satisfy the functional, performance and safety requirements for the AMS Safe Computer.

A number of vendors were approached, with OEM Technology Solutions and their partner, MEN Mikro GmbH, ultimately chosen for the project: "OEM’s technological capabilities in railway products and services, their experience in the local railway market, their local presence and the fast turnaround times offered were key to awarding the contract," according to Lockheed Martin’s Blaine Groves.

MEN Mikro is a leading, specialist vendor of safety critical systems to high-profile international clients in avionics and rail environments.

The high integrity AMS solution’s Validation Server has three independent CPUs with identical I/O functions using independent backplanes and redundant power supplies. At least two of the three on board computers must yield identical results to guarantee the correct operation of the complete system.

The system passed due diligence and proof of concept phases and is being rolled out in a series of trials, before commissioning for live operations between Port Augusta and Whyalla in 2016.