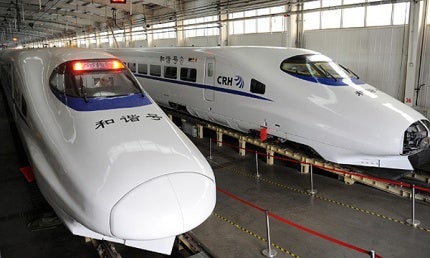 Xiangtang-Putian Railway, also known as the Xiangpu Railway, is a newly opened high-speed line in China connecting Nanchang and Fuzhou, the capital cities of Jiangxi and Fujian Provinces respectively.

The 635.9km Xiangpu Railway was opened in September 2013 and ranks among the ten longest high-speed rail lines in the world. Construction of the RMB51.8bn ($8.2bn) high-speed rail project developed by China Railway Corporation started in October 2008.

Xiangtang-Putian Railway allows trains to operate with speeds of up to 200km/h. The travel time between Nanchang and Fuzhou has been reduced to just 3.5 hours, compared with 11 hours previously.

Details of the Xiangtang-Putian Railway

Xiangtang-Putian Railway is used for both passenger traffic and freight transportation. It is the first mixed-use high-speed line between the Jiangxi and Fujian provinces in east China.

"The high-speed line consists of 24 stations in total."

Introduction of the Xiangpu high-speed rail has forced the regional airlines to slash the air fares significantly to stay in competition with the newly launched high-speed train services between these two regions.

The high-speed line consists of 24 stations in total. The major cities and towns along the route include Nanchang, Nancheng and Nanfeng in the Jiangxi Province, and Jianning, Taining, Jiangle, Sha County, Youxi, Yongtai, Fuzhou and Putian in the Fujian Province.

The railway line also provides high-speed connection to Xiamen, a major city on the southeast coast of China, reducing the travel time between Nanchang and Xiamen from 16 hours to just six.

Xiangtang-Putian Railway passes though the Ganjiang, Fuhe and Minjiang rivers and the Wuyi and Baiyun mountains along its route. The project involved the construction of 247 bridges and 116 tunnels, which accounted for more than half of the total route length.

The 7.6km long two-way rail bridge built on the Minjiang River is the biggest bridge on the line. The tunnels built as part of the project measure 10km in total length.

Xiangpu railway line starts at the Lehua East Station on the Changjiu Intercity Railway and heads southwards to the Nanchang West Railway Station located in the Jiangxi Province.

The line heads south-east from Nanchang to Yongtai in the Fujian Province where it forks into two lines, including one to Fuzhou and the other towards Putian. The line connecting Fuzhou is known as the Changfu Railway, while the Yongtai-Putian section of the high-speed line is officially named Yongpu Railway.

"The tunnels built as part of the project measure 10km in total length."

Xiangtang-Putian Railway is currently operated with 15 250km/h high-speed electric multiple unit (EMU) trains, including ten CRH2A EMUs and five CRH1 EMUs, which can respectively carry up to 670 and 610 passengers.

CSR Qingdao Sifang delivered the first batch of CRH2A trains for the Xiangtang-Putian Railway in October 2013. The 250km/h trains provide numerous luxury features including adequate dining and wheelchair parking facilities, as well as washroom provision with water boiler facilities in each passenger coach.

Xiamen–Shenzhen High-Speed Line, China
The Xiamen-Shenzhen high-speed line connects the Xiamen city in the Fujian Province with Shenzhen in the Guangdong Province of China.