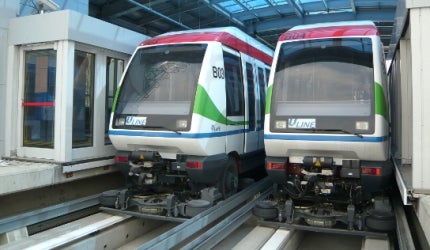 With 15 two-car train sets running every 205 seconds, the two track U- Line is expected to be used by 3,400 passengers per hour in each direction during peak time. The expected annual passenger traffic is 32 million. The trains are in operation for 20 hours a day.

"The trains are in operation for 20 hours a day."

The Uijeongbu LRT is the second fully automated line in Seoul, after the Sin Bundang Line, and the third driverless line operated in South Korea. The project was built on a turnkey basis through a private public partnership (PPP) by a Korean consortium led by GS Engineering & Construction. The consortium will also operate the line for 30 years.

It took five years and $475m to build the project. Out of the total cost, $258.4m was provided by the consortium with the remaining coming from taxes.

The initial plan of extending Line 1 of Seoul Metro could have helped Uijeongbu meet the transport needs of its growing population. But, with no hope on the extension in the near future, the city council of Uijeongbu decided to develop its own light metro.

Line routes of the Uijeongbu LRT

The 11.2km-long elevated light metro covers 15 stations and links the eastern part of Uijeongbu with the commercial and civic centres of the city. It begins at Balgok and ends at Tapseok. It has an interchange at Hoeiryong with Line 1 of the Seoul subway.
The U-line has reduced the travel time between Balgok and Tapseok to 19 minutes, compared to bus travel that takes 40 minutes.

Construction of the new LRT in the city of Uijeongbu

A company called Uijeongbu Light Rail Ltd (URLL) was specially created in 2005 for the purpose of developing the light rail system. The city of Uijeongbu holds a 45% stake in URLL, while the remaining stake is owned by the consortium led by GS Engineering & Construction.

The LRT is elevated and mostly built above river courses and flood channels. Construction started in 2007, with tracks laid by summer 2011 and signal works completed by the end of 2011.

Seoul metropolitan subway in South Korea is the most widely used rapid railway transport system in the world, featuring ten subway lines. The system serves nearly ten million inhabitants of the capital city, Seoul, and the provinces of Gyeonggi, Incheon and northern Chungnam.

The civil works related to the construction of the Uijeongbu LRT project were contracted to consortium of GS Engineering & Construction and other Korean companies.

Siemens Transportation Systems was awarded a contract worth €140m ($181.5m) in November 2006 to provide the electrical and mechanical systems, automatic train control and depot equipment, and rolling stock.

Systra provided the project management and construction supervision services for the LRT.

The Uijeongbu LRT currently uses 15 VAL 208 NG trainsets supplied by Siemens. The fully automatic trains provide shorter headways of less than one minute and offer maximum speed of 80kmph with fast acceleration and short braking phases. Their rubber tires create less noise and are ideal for inclines and tight curves on the track.

Each train set is 26m long and has two air-conditioned carriages running on 750V DC. It has 38 seats but can carry up to 236 passengers.

The control and regulation of train movements are performed by an automatic operations control system. Continuous monitoring is carried out at the control centre with the use of video cameras installed in the stations. The control centre will even deploy additional trains when there is a surge in passenger numbers.

The future of U-Line

The Uijeongbu LRT is expected to carry approximately 55 million passengers per year over the next 20 years with the addition of new rolling stock. The ridership during peak times is also anticipated to rise up to 6,400 per hour in each direction by 2040.