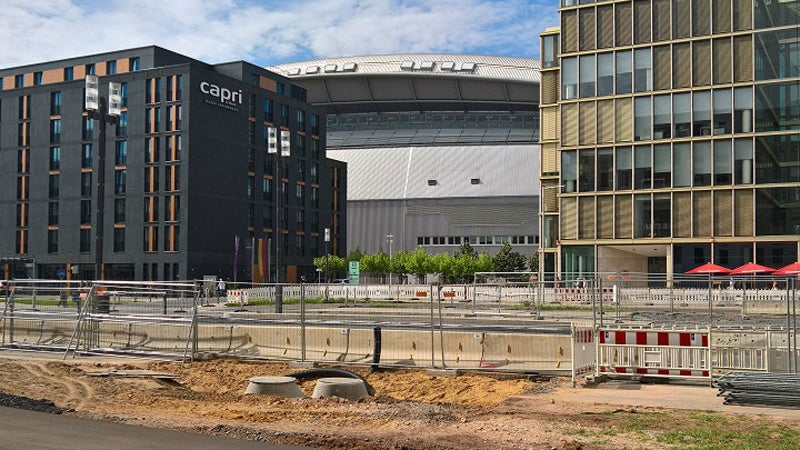 The U5 Line Extension project is a 2.7km extension to the exiting U5 Line, which operates between Preungesheim city and the main railway station in Frankfurt, Germany.

The extension will provide a light rail link to Europaviertel, a newly developed urban neighbourhood located at the heart of Frankfurt. Developed in a 670,000m² area with residential, commercial and social infrastructure, Europaviertel has a population of more than 30,000.

The City of Frankfurt appointed Stadtwerke Verkehrsgesellschaft Frankfurt am Main (VGF), a rail-bound public transport company in Frankfurt, for the construction of the project.

VGF formed a new subsidiary named Stadtbahn Europaviertel Projektbaugesellschaft (SBEV) for the management and implementation of the project.

SBEV currently focuses only on the extension project. VGF holds a 51% stake in the subsidiary, while the remainder is owned by the City.

Construction began in 2016 and the line is scheduled to open in late 2022.

Details of U5 Line extension

The proposed tram line will extend the existing line from Frankfurt’s central railway station to Europaviertel.

The extension will begin from the branch below Platz der Republik and run underground for 1.4km to the next station. It will then travel over a ramp to reach the surface at centre of the Europaallee, before crossing a 1.3km stretch via three overground stations.

Stations on U5 Extension

Situated approximately 20m below the surface, the Guterplatz underground station will feature a 100m-long railway platform, as well as weather-protected openings for ventilation.

Construction of underground tunnel for the U5 extension

During the closed construction, a boring machine will be used to create two single-track tunnels, each with a length of 840m and diameter of 6m.

The tunnelling work will begin in Q2 2018 and take approximately two years to complete.

"Each station will feature long platforms that can accommodate three-car trains, as well as passenger waiting halls with dynamic passenger information (DFI) signage and seating."

The contract to construct the 1.16km-long underground section of the line was awarded to PORR Deutschland in a consortium with Stump Spezialtiefbau.

The €120m ($126.3m) contract will include the development of an underground section that stretches from Platz der Republik to where the line emerges above ground. It also covers various construction operations at the Guterplatz underground station.

PORR will commence construction in early 2017, and use the earth-pressure-balance method to build the two tunnel tubes over a 16-month period.

Financing for the tram line extension

The estimated investment for the project is €281m ($295.9m), which will be funded by the City of Frankfurt, the State of Hesse, the Confederation, and VGF.