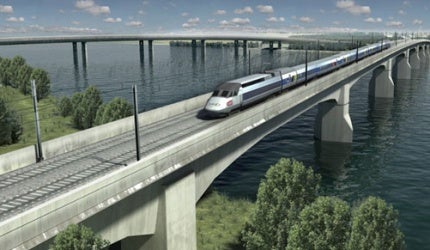 Construction of the project started in mid-2012 and was completed in early 2017. The line is scheduled to open for passengers in July 2017.

"The €7.8bn project involved construction of a new 302km high-speed link between Tours and Bordeaux."

The €7.8bn ($10.06bn) project involved construction of a new 302km high-speed link between Tours and Bordeaux, as well as 38km of connecting lines to the existing rail network along the corridor.

The line passes through Centre, Poitou-Charentes, and Aquitaine regions, as well as through six departments of France. It reduces the journey time between Paris and Bordeaux by approximately one hour. As many as 20 million passengers can take advantage of the high-speed transport service on the new line.

The project created 4,500 temporary jobs during construction and will generate 150 permanent jobs in the operation and maintenance stages. It will also free up the existing Tours-Bordeaux line for more freight and regional express train traffic.

The Tours-Bordeaux High-Speed Rail Project was advanced as part of an integrated plan for developing national and European high-speed railway networks. It was proposed as an extension of the LGV Atlantique, a high-speed line from Paris to Western France that opened in 1989.

LGV Atlantique consists of one line running westward to Le Mans towards Brittany and another routed in a southwest direction to Tours. The Tours-Bordeaux line extends the southwest LGV Atlantique up to Bordeaux.

Completion of the proposed Grand Projet ferroviaire du Sud-Ouest (GPSO) project will enable the Tours-Bordeaux line to further open up the regional network.

Preliminary studies on the Tours-Bordeaux line were conducted between 1995 and 2002. Early design studies were completed in 2007, while the process for selecting the concessionaire started in 2009. Project implementation followed concession contract award in June 2011.

The Tours-Bordeaux High-Speed Rail line was built through a 50-year concession contract, the largest of its kind.

The Brittany – Loire Valley high-speed line, also known as BPL, has been under construction since July 2012. The new high-speed line will be 182km long, connecting the cities of Le Mans and Rennes. The BPL will extend the existing 180km high-speed line between Paris and Connerré, which was built in 1989.

The concession contract includes financing, design, construction, operation, and maintenance of the project for 50 years. The design-build contract has been awarded to COSEA, a consortium led by VINCI Construction. Other players include Eurovia, BEC, NGE, TSO, Ineo, Inexia, Arcadis, and Egis Rail.

A company called MESEA has been formed by VINCI Concessions (70%) and Inexia (30%) to operate and maintain the high-speed line.

The Tours-Bordeaux High-Speed Rail is funded through a public-private partnership. LISEA is responsible for financing €3.8bn ($4.9bn) of the project cost. Sources for LISEA’s financing include equity contribution by LISEA shareholders, the European Investment Bank (EIB), Fonds d’Epargne, bank debts guaranteed by the French Government, and non-guaranteed bank debts.

Public subsidies offered by the French Government, local communities, and the EU will amount to nearly €3bn ($3.8bn). RFF will invest €1bn ($1.3bn) in the project.

The 302km new high-speed line connecting is a double-track line, which allows trains to operate at speeds of up to 320km/h on electric power. The line passes through 19 viaducts and seven cut-and-cover tunnels. The project involved construction of 400 civil engineering structures in total.

The new line bypasses Libourne, Poitiers, and Angoulême with 17 new connecting lines. This line is 38km long in total.

Preparatory works such as excavation and installation of access tracks started in 2012. Earthworks and civil engineering works were complete by July 2015.

Contractors and suppliers involved in the Tours-Bordeaux HSR line

Eurovia Travaux Ferroviaires and TSO laid tracks for the new high-speed line and Tata Steel secured an order in 2011 to supply rail infrastructure. Vossloh was awarded a contract worth €60m ($77.4m) in September 2012 to supply switch and rail fastening systems for the project.

Ansaldo STS was awarded a €46.7m ($60.2m) contract in January 2012 for providing signalling systems and services for the line. The company supplied its Interlocking SEI and TVM 300 technologies along with track circuits and hot box detectors. Arcadis was awarded a subcontract worth €25m ($32.2m) in the same month to carry out design works of certain structures of the Tours-Bordeaux high-speed rail project.