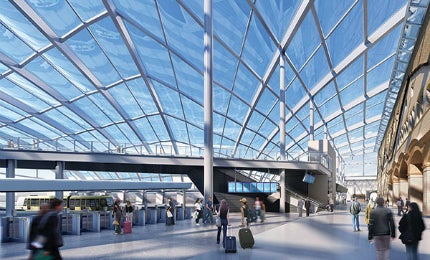 Manchester Victoria, the second biggest mainline railway station after Piccadilly in Manchester, UK, was reopened in October 2015, after a three-year redevelopment.

The station was refurbished with an investment of £48.5m ($74.4m) under the £1bn Northern Hub project, which includes a series of improvements to the railway in the north of England.

Station upgrades, aimed at increasing rail capacity across the north of England with faster and more frequent services connecting key towns and cities, were managed by Network Rail.

"A glazed dome inside the station building was cleaned and restored, and a new mezzanine level was created to provide retail spaces and lifts."

Manchester Victoria railway station was first opened in January 1844. It included a number of Grade II listed buildings, and originally had a single platform. The station underwent a number of expansions, and by 1909 had 17 platforms and an area covering 13.5 acres (5.46ha) of land.

A report by the Department of Transport in November 2009 identified the station as the worst category B interchange station in the UK, which prompted Network Rail to initiate the station redevelopment in February 2010.

Station upgrade works included installation of an 8,500m² roof that arcs over the fully refurbished concourse. The roof is made up of 410 ethylene tetrafluoroethylene (ETFE) panels. The roof supporting ribs were put in place with a 750t crawler crane.

The roof is supported by 15 giant steel ribs. The biggest rib has a length of 96m and weighs approximately 80t. A new 60m bridge linking the station with the adjoining arena was also constructed.

A glazed dome inside the station building was cleaned and restored, and a new mezzanine level was created to provide retail spaces and lifts.

The Soldiers Gate, which was used in World War II, was kept as a new commemorative at the station building.

Construction details of the station redevelopment

Construction on the station upgrade project began in April 2013. The old roof was destroyed during over several nights between spring and autumn 2013. Construction works commenced in late 2013 after setting up 15 large buttresses as a temporary roof over the station to separate it from the works above. The final roof beam was lifted into position in October 2014.

The installation of ETFE roof started in May 2014, and ETFE sheeting was completed by mid-2015. The roof and new mezzanine structure linking the Manchester arena to the station concourse were completed along with Metrolink works in June 2015.

The station was finally reopened in October 2015.

BDP was selected as the architect and heritage consultant for the Manchester Victoria station redevelopment. The company provided the design for the upgrade to restore the original Grade II Edwardian frontage building.

Hyder Consulting was contracted to provide the design of the new station roof, mezzanine and Metrolink stop.

Financing for the station upgrade project