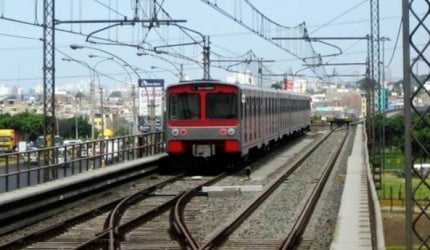 Lima Metro, also called Tren Eléctrico, is a rapid transit metropolitan railway that serves Lima, the capital city of Peru. It provides a transport link between different suburbs of the city with more than eight million people.

Line 1 of the Lima Metro was put into operation in January 2012. A 12.4km stretch of the second phase of line 1 was opened in July 2014. Proposals for construction of Line 2 of the metro were accepted in 2012. A consortium led by Geodata Engineering was awarded the consultancy contract in July 2012. Three consortiums were shortlisted for the concession contract of the Line 2 in February 2014.

The 30-year concession contract was finally awarded to a consortium led by ACS and FCC in March 2014. The consortium will design, finance and build the line 2 in five years, and will operate and maintain the line for 30 years. The €3.9bn ($5.36bn) contract also includes a branch line from line 4 to the airport. The consortium, named Nuevo Metro de Lima, comprises Salini-Impregilo, Cosapi, Ansaldo Breda and Ansaldo STS. The first five kilometres of the line 2 is expected to be operational in May 2016.

History of the Lima Metro project

"In December 2009, Tren Electrico Lima consortium, comprising Grana y Montero and Norberto Odebrecht, was selected as the winning bidder for the construction of the line, for $410.2m."

The proposals for a mass rapid transit system to serve the city of Lima were made in 1970s, with construction starting in 1986 but was abandoned midway as the country’s economy plunged into a deep economical and social crisis.

The project resumed in 2008 and tenders were issued by the government’s private investment agency ProInversion. Several consortia were interested in the bid, which included construction and operation of Line 1 for a concession period of 40 years, including Acciona and Graña y Montero, Metro de Madrid and OHL and Cobra and Abengo-Telent. A length of 9.2km of the line was already constructed, with the winner constructing the remaining 12.3km stretch and operating the whole line. The tender was, however, abandoned due to lack of funding for the project.

In December 2009, the Tren Electrico Lima consortium, comprising Grana y Montero and Norberto Odebrecht, was selected as the winning bidder for the construction of the line, for $410.2m. Work on the line started in March 2010 and included the construction of nine new stations and installation of new electromechanical equipment for the entire route. The total cost of the project was estimated to be approximately $549m, with Corporación Andina de Fomento granting a $300m loan.

In March 2011, ProInversion awarded Tren Lima (consortium of Graña y Montero and Ferrovías) the operation and maintenance contract of the metro for a concession period of 30 years. A $290m investment was put forth for the project by the consortium, with around $200m from the investment set to be used for the purchase of new rolling stock.

Corporación Andina de Fomento agreed to fund a feasibility study of phase II of Line 1 of the metro in 2010.

In October 2011, OTN Systems was contracted to install OTN-X3M communication system with a transport capacity of 10Gbit/s and carrier grade ethernet features to support fibre-optic telecommunications of the metro line.

The first phase of Line 1 of the Lima Metro is 22km-long, including a total of 16 stations, starting from Villa El Salvador to Miguel Grau. The whole stretch runs on standard (1,435mm) gauge and 1,500V DC power supply, and is extended northwards to stretch to more than 34km with an additional ten stations.

Lines 2 and 4 will comprise five stations, 35km of tunnels, two depots and 42 trains.

The first phase of Line 1 was being served by 42 train sets designed by Ansaldo Breda, while Alstom was awarded a $158.6m contract to supply 19 five-car Metropolis train sets for operation on Line 1. These trains have low floor, wide doors, extra-wide seats and extra width to ensure free flow of passengers. They also allow maximum natural light to enter inside the vehicle and are fitted with information displays. The first train set of the order was delivered in late 2012 and became operational in 2013.

Bombardier was awarded a $19.36m contract for the supply of Cityflo 350 signalling for Line 1. The contract included the installation of interlocking, track circuits and control equipment on the entire line.

The Cityflo 350 signalling system includes onboard automatic train protection (ATP) and automatic train operation (ATO). Both the systems are integrated with a display in the driver’s cabin.

The Line 2 of the metro will stretch 27km and will be underground with 27 stations. It will connect Ate in Lima with the Callao region, bordering the capital and intersecting Line 1 at Miguel Grau.

Charities Aid Foundation Bank has agreed to issue a loan of $600m for 18 years and a grace period equivalent to construction phase of the line. Line 3 and Line 4 of the metro are also being proposed. An 8km branch from line 4 connecting to the International Airport will also be built with eight underground stations.

TYPSA is responsible for the final design of Line 2 section, which will connect Benavides Station to the port of Callao, and also the line 4 branch line.

In January 2016, Ansaldo STS awarded a contract to Siemens for the electrification of entire metro line 2 and 8km-long Phase I of Line 4.