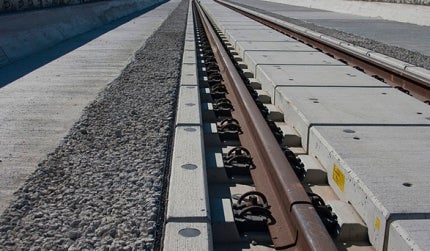 The new line reduces the travel time between Munich and Berlin from 6h to 3h and 45min, while the time between Erfurt to Leipzig is reduced from 70min to 39min.

The line is operated by DB ProjektBau, a subsidiary of Deutsche Bahn.

The rail line project was conceived in 1991, while in June 1994, Germany’s Federal Ministry for Transport, Construction and Urban Development selected the current route between Erfurt and Leipzig / Halle, after examining five options and many sub-options. Between 1994 and 1996, a detailed planning approval was granted for the 12 sections by the German States.

The project involved an estimated investment of more than €2.6bn ($3.25bn).

The line broke ground for construction in October 1996 and was complete in December 2015. It included construction of a 123km standard gauge with a double-track electrified railway line for high-speed passenger and freight traffic. It also included 14km of viaducts, six bridges and three tunnels. The track is designed for a maximum speed of 300km/h.

The longest viaduct on the line is the Saale-Elster viaduct. It involved the construction of a superstructure with a single-span, with beams supported on piers positioned every 44m, and continuous welded rails; the total length of the viaduct is 8,577m. The construction of Saubach viaduct began in 2004 and was completed in 2006, while Unstrut viaduct construction started in 2007. A 110m flyover with a steel arch was built on the Erfurt / Halle line.

A 23km line between Leipzig and Gröbers was completed and opened to service in June 2003. The line has new stations at Leipzig Messe and Leipzig / Halle Airport and was constructed at a cost of €370m ($423m).

Three twin-bore tunnels were built at Finne (6.8km), Bibra (6.4km) and Osterberg (2km). The Finne tunnel construction began in 2008 and was complete by mid-2010. It involved building two parallel tubes with a maximum gap of 500m between them.

The planning and design for the Erfurt and Leipzig / Halle high-speed line was provided by Krebs und Kiefer Consulting Engineers for Construction.

In August 2011, DB Netz awarded a €200m ($289.35m) contract to Austrian firm PORR for the supply of ballastless track for the 90km section between Erfurt and Gröbers. The scope of the contract also included construction of 22km of noise and wind protection walls.

In April 2012, Rail.ONE Group was awarded a contract to supply 22,000m of turnout sleepers for the double track section between Erfurt and Gröbers. Rail.ONE supplied GWS 05-300W sleepers, which were manufactured at its Brandenburg-Kirchmöser plant.

The Saale-Elster viaduct construction contract was awarded to a consortium consisting of Hochtief, Adam Hörnig, and Gerdum U Breuer. Schüßler-Plan in association with SSF Schmitt Stumpf Frühauf & Partner provides engineering consulting service for the project.

“The new line features a slab track, which is equipped with ETCS train control system.”

In 2008, the €240m ($374.58m) Bibra tunnel construction contract was awarded to Marti Tunnelbau, a Switzerland-based company. Dr Spang was awarded the contract for geotechnical monitoring of earthworks.

The Osterberg tunnel construction contract was awarded to a consortium of PORR, Hinteregger, ÖSTU and JÄGER.

Siemens and its consortium partner Kapsch CarrierCom Deutschland were awarded a contract to deliver railway control, signalling and GSM-R technology for the new line.

The new line features a slab track, which is equipped with ETCS train control system. It has three new electrical substations located at Bachsted, Saubach and Dörstewitz and 15kV overhead electric power lines.